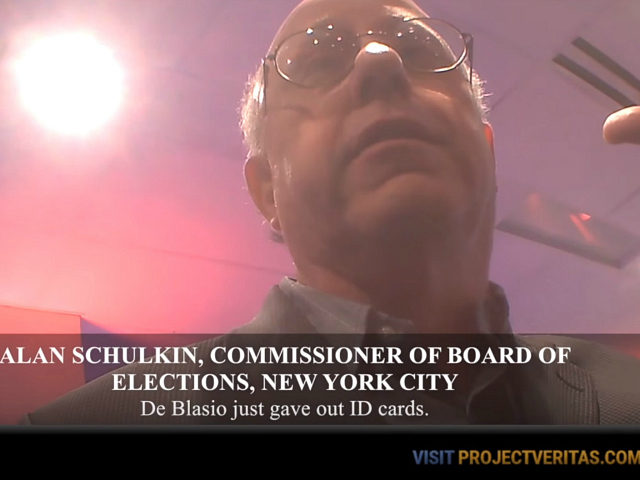 Alan Schulkin, the Commissioner of the Board of Elections for New York City (a Democrat) was recorded on video explaining how voters are bused around the city from polling station to polling station to vote multiple times for Democratic candidates or for a particular issue. Because New York has no anti-voter fraud measures in place, Schulkin even suggests that voters should be required to show their ID before voting.

“You know, I don’t think it’s too much to ask somebody to show some kind of an ID… Like I say, people don’t realize, certain neighborhoods, in particular, they bus people around to vote. … Yeah, they should ask for your ID. I think there is a lot of voter fraud.”

But, he points out, local precinct volunteers can’t actually ask voters to show their ID– and explains why. NYC Mayor Bill DiBlasio:

“He gave out ID cards. De Blasio. That’s in lieu of a driver’s license, but you can use it for anything. But, they didn’t vet people to see who they really are. Anybody can go in there and say I am Joe Smith, I want an ID card. It’s absurd. There’s a lot of fraud. Not just voter fraud, all kinds of fraud.”

These comments were recorded in 2015, but since then nothing has changed. It’s still incredibly easy to commit multiple counts of voter fraud in New York City– because fraud is systemic and judges have tried to keep it that way.

This past summer, despite legislative efforts to minimize fraud, North Carolina and Wisconsin judges struck down voter ID laws over concerns that they made it more difficult for minorities to vote. Lawsuits were filed in Arizona, Ohio, Texas, and Virginia in response to Democrat Party attempts to register illegal aliens and refugees.