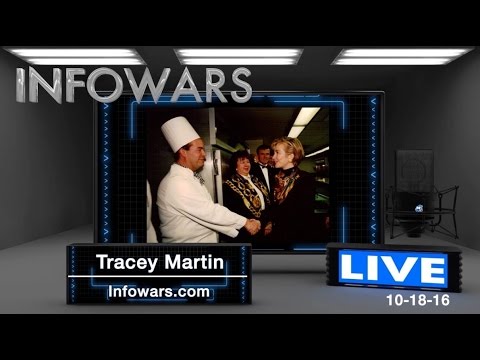 A former traveling chef for Bill and Hillary Clinton says that Hillary used to scrawl hand-written notes that referred to black people as “n***ers”.

Tracey Martin, who worked for the Clintons during their first administration, has overseen culinary events for numerous world leaders, including Margaret Thatcher, Helmut Kohl and President and Mrs. George H. W. Bush.

In an interview with Alex Jones, Martin expanded on claims he first made during an interview with WBEN 930 radio host Tom Bauerle, specifically that Hillary Clinton angrily called a black servant the n-word when he made a mistake during a function at the Elizabeth Taylor Medical Center in Washington DC when Clinton was hosting with Bernadette Chirac, the wife of the former French President Jacques Chirac.

“It was just Mrs. Clinton, Mrs. Chirac and myself in the same room and one of the people brought in something and it did not please her and she used the n-word very openly,” said Martin, adding that it was a “general pattern” and “very common” for Hillary to use the racial slur.

Martin provided more detail, adding, “We had somebody bring in something – I think it was tea sandwiches or whatever and it wasn’t exactly what she wanted – so she tells me to tell that n-word to please leave and get what she wants.”

“A lot of times because they have so many handlers….they just scratch things down on paper because you need to be quiet, there’s a lot of people around,” said Martin, adding that the notes would consist of lines like, “Tell that n-word that I don’t need them, or she could say ‘that bitch over there’ or whatever.”

Martin also revealed that Hillary was so self-entitled that she would often refer to her staff as “the small people” and was also demeaning towards Hispanics, making fun of their accents.

Martin noted how Hillary would appear grateful to back of the house staff – but only when the cameras were around – and would immediately revert back to her spiteful personality when there was no media present.

Martin said he felt obligated to go public having “sat silent for so long”. He is not promoting a book and has no way of profiting from going public.

Martin’s accusations have been completely ignored by the mainstream media despite carrying exactly the same weight as the accusations made by women who claim Donald Trump sexually assaulted them.

While Trump’s accusers have been afforded wall to wall media coverage, Martin has received precisely zero press attention, despite his claims being arguably more damaging.