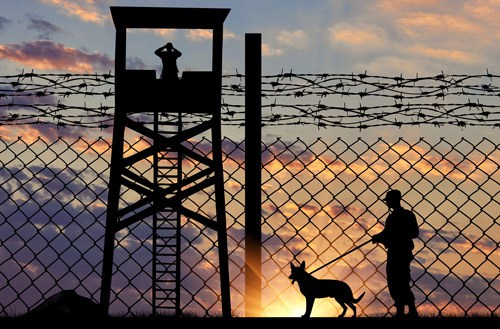 As you are probably well aware, the Obama administration would like nothing more than to place the United States under Martial Law.

Once that is accomplished, the country and people would be locked down and kept under control on the pretext of continuing with the government and/or maintaining the national security of the U.S.

Let’s take a look at 5 events the administration would be most likely to utilize to reach this end state.

Note: All of these can occur simultaneously, successively, or individually in any combination at any time: there is no limit to their use or potential to recur!

Over the course of this past year, we have seen a tremendous amount of volatility in trade (international) and the U.S.’s domestic manufacturing base.  As our fragile economy is based on 75% of consumer spending, any significant downturn that keeps the shoppers home can lead to disastrous reports.  Lower consumer spending means people do not buy goods and services beyond the absolute essentials, and worse: (in the government’s eyes) they hoard money and withdraw their funds from bank accounts.

The Baltic Dry Index (BDI) can be seen as a key indicator of raw goods and materials transported to manufacturers and consumers via shipping contracts.  As mentioned in previous articles, Hanjinn Container Company, the7th largest container corporation in the world just filed for bankruptcy over the summer.  You can see the BDI fluctuations day by day when you visit http://www.bloomberg.com/quote/BDIY:IND.  It has been fluctuating wildly over the past year.

Deutsche Bank is on the verge of bankruptcy and large banks such as Bank of America and J.P. Morgan have been plagued by losses and lawsuits alike.  The unemployment rate is truly about 25% and the “Soviet” style statistics quacked from the radio on “record gains” and “economic improvements” are false and intentionally misleading.  A “Bank Holiday”has already happened in places such as Indianapolis, and when the politicians, bankers, and oligarchs decide, they will pull the plug on a Federal Reserve system of fiat currency that is already an ineffective laughingstock of a smirking world that is steadily returning to the gold standard.  When that Bank Holiday is declared, you can be sure the financial systems will collapse and Martial Law will be waiting in the wings.

This one is definitely one of the administration’s favorites.  We’ve been seeing signs of this with the DHS (Department of Homeland Security) and DNI (Director of National Intelligence)letters and statements that the Russian government is hacking into the American electoral and election process.  The “targeting” of the DNC (Democratic National Convention) e-mails was assigned to the Russians and officially the Russian government has been accused by the administration of such, and trying to influence the presidential race on Friday, 10/14/16.

We also saw on 9/7/16, two days before the 5th North Korean nuclear test, the corporation based in California that monitors North Korean missile launches and nuclear testing was hacked into.  A DoS (Denial of Service) was placed into their computer systems, preventing them from uploading satellite feeds and photos that would have enabled them to monitor the North Korean launch.  That corporation is the Project on Crowdsourced Satellite Imagery.  You can read more about this in the article “DoS Attack Crashes Website Monitoring North Korea’s Nuclear Test Site,” by Eric Niiler of Wired.com.

If other governments can crash our internet and servers, do you think it is possible that the U.S. government as directed by the Obama administration can do it on its own?

When that occurs, cell phones will go down, the computers will go down, the financial markets will be in a turmoil and cease trading, and ATM’s and bank cards will be rendered useless.  Transportation, inventories, shipping, and deliveries will all be thrown into a turmoil and come to a halt.  For an excellent description of this, read Mac Slavo’s article from SHTFplan.com entitled “When the Trucking Stops,” that shows how vulnerable our nation’s supply lines are.  Bottom line: if all of this goes down as a result of a cyberattack, Martial Law will immediately follow.

As of last week, Obama just signed an Executive Order (EO), entitled “Executive Order: Coordinating Efforts to Prepare the Nation for Space Weather Events,” signed 10/13/2016.  Such an EO could cover meteor strikes, Coronal Mass Ejections (CME’s) from the sun, a comet, or any other space anomaly.  Not a big deal, you may think?  It is a big deal, because here’s the bottom line:

Who is to prevent Obama from either causing another nation to launch an EMP (Electromagnetic Pulse) weapon, or launching one of his own (U.S.-made weapon), taking down the grid and subsequently blaming it on a CME event/solar storm, courtesy of the sun?

Other events would include potentially man-made or generated storms, such as earthquakes, hurricanes, or even volcanic activity.  If one scoffs at such, remember all that it would need is a 1 megaton nuclear “kicker” to set off either Yellowstone Caldera or the San Andreas Fault.  Such natural disasters (initiated by man or genuine) usually result in Martial Law at the state level on a regular basis, much less one that is national in scope…that Obama would jump on to inculcate Martial Law.

Any day we could be at war with North Korea, Iran, China, or Russia.  The resulting devastation, whether a full-scale or a limited nuclear war would automatically set in motion the wheels for COG (Continuity of Government), and a declaration of Martial Law.

Let me close this portion with my caveat:

World War III will begin with the detonation of an EMP device or weapon over the continental United States, followed by a limited nuclear exchange and then conventional warfare.

Either naturally-occurring, or man-made.  The CDC (Centers for Disease Control) just inherited a tremendous amount of “police power” over the summer regarding their newfound ability to quarantine individuals or large groups of people on the suspicion of contamination/communicability regarding viral or bacterial pathogens relating to a potential or real pandemic.

There is an article by Catherine J. Frompovich entitled “ALERT: U.S. CDC Giving Itself Unconstitutional Powers to Round Up and Detain Citizens En masse Anytime, Anywhere and Throw Away the Key,” dated on 9/3/16.  This article details how these police powers were created in the Federal Register as the Proposed Rule “Control of Communicable Diseases” on August 15, 2016 that are now in effect to be found under Federal Register Number: 2016-18103.  Guess what?  That proposed rule is now law, and could easily be utilized to “justify” Martial Law in the U.S. because of a pandemic: naturally-occurring, man-made, or phony.

In addition to all of these juicy tidbits, the deciding factor is what I refer to as the “IHM,” or “Incredible Human Mob.”  Yes, Civil Unrest is a factor; yet it is not a method but a “sign/symptom,” a “side-effect” of what happens when one of the aforementioned 5 methods are employed.  “In the interests of public safety,” or “to protect the public,” or “to maintain law and order” are the phrases trumpeted by our benevolent and friendly government.

As Rahm Emmanuel said, “Never let a crisis go to waste,” the very ones who are to be protected (the public) are the ones who create the conditions for civil unrest.  It’s literally a “problem that takes care of itself,” and here’s the bottom line to cover the Civil Unrest factor:

Using the fake justification “in the interests of the safety of the people,” martial law will be declared to confine, restrict, and control the people…protecting them from…themselves.

Then come the restrictions to travel, the police state in the streets, at the workplace, and the confiscation of firearms.  Then comes the removal of “dissidents and potential troublemakers,”as well as the curfews, restrictions, and limitations in every facet of our society.  Martial Law is an objective of the Obama administration.  The problem is that he (Obama) cannot just arbitrarily declare it.  The declaration requires a prod, such as one of the 5 methods mentioned.  In those circumstances, he then can suspend our rights under the Constitution and bypass the true laws of the U.S.  Such an end state is his desire.  Such an end state would also mean the end…of the United States.