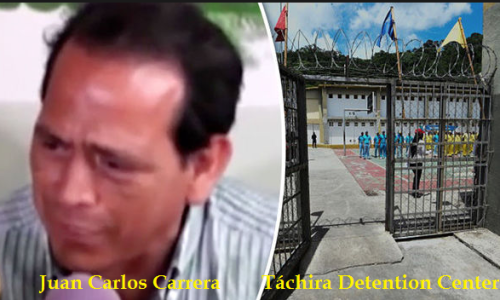 Venezuela is a failed state from years of socialism.

There are reports of interminable long lines in supermarkets, although many shelves are empty; of food riots; and of people killing pets and zoo animals for food.

There are shortages of drinking water and of hospital supplies as basic as bandages, as well as massive power outages.

On Sept. 1, 2016, half a million people swarmed the streets of Venezuela’s capital to demand the recall of President Maduro — to no avail.

Now comes even more horrifying news: Prisoners are being cannibalized by fellow inmates.

Alex Vasquez reports for Fox News Latino, Oct. 14, 2016, that “Juan Carlos Herrera is beyond devastated. He says his 25-year-old-son, jailed in 2015 for robbery, was beaten, dismembered and eaten by fellow inmates at the Táchira Detention Center.”

On Sept. 8, 2016, protesting Táchira’s overcrowded conditions, a group of prisoners mutinied, taking 8 visitors and 2 guards hostage, and demanded that some of the 350 prisoners be transferred somewhere else (the Tachira Detention Center’s capacity is 120).

On October 10, Herrera told the local media that he found out about the cannibalism during a regular prison visit three days after the month-long mutiny had ended. Herrera tearfully recounted:

“One of those who were with him [Herrara’s son] when he was murdered saw everything that happened. My son and two others were taken by 40 people, stabbed, hanged to bleed, and then Dorancel butchered them to feed all detainees. The [inmate] with whom I spoke to told me that he was beaten with a hammer [in order] to force him to eat the remains of the two boys.”

Dorancel Vargas, nicknamed “people eater,” has been in prison since 1999 for cannibalism.

Herrera’s son, Juan Carlos Herrera Jr., and one other inmate were unaccounted for when prison guards re-entered the facility after the mutiny was suppressed.

The Táchira mutiny is not unusual. There have been hundreds of mutinies in Venezuelan prisons every year, including 200 riots thus far in 2016, according to the non-governmental organization Una Ventana a la Libertad (A Window to Freedom).

The Minister of Correctional Affairs Iris Varela confirmed the disappearance of Herrera Jr. and the other prisoner, but denied the cannibalism allegations. She said while she “understands the father’s pain,” she regretted that he’s being used to channel lies that can be “easily debunked.”

But a police source who asked to remain anonymous told Fox News Latino the claims of murder and cannibalism are true: “Two [inmates] are missing. They cut them up and fed them to several [of the fellow inmates], they made the bones disappear. Dorancel cut the flesh.”

For his part, Humberto Prado, coordinator of the Venezuelan Prison Observatory (OVP), said the alleged cannibalism would be nothing new in Venezuela’s prisons. Prado told FNL:

“Prisoners have been dismembered before and some inmates have forced other prisoners eat their [own] fingers. That happened in a detention center in El Tigre. But inmates die not only from that [kind of violence], there are many prisoners who die of hepatitis, cirrhosis or famine.”

Prado said the OVP will ask the Attorney’s General Office to start an investigation and will submit the case to the United Nations Human Rights Commission.

“What hurts me most is that I cannot bury my son, I can’t give him a Christian burial. I beg you to give me at least one bone so we can bury him and relieve some of this pain.”

Meanwhile, as Venezuela spirals into the abyss, still not a word or even donations to help starving Venezuelans from actor Sean Penn, who was BFF with the country’s late president Hugo Chavez.

Early this October, actors Jamie Foxx and Lukas Haas even paid a touristy visit to Venezuela, complete with photo ops with President Maduro. Maduro had invited the actors to visit the government-funded film and TV studio, Fundación Villa del Cine, and other tourist attractions.