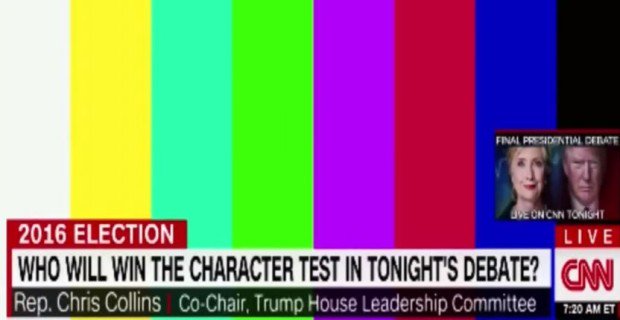 During an appearance on CNN this morning, Congressman Chris Collins’ satellite feed was cut as soon as he began talking about Wikileaks.

Host Chris Cuomo asked Collins what he thought Trump could do in tonight’s debate to prove he was fit for office. However, the Congressman went off script.

“Two thirds of the public know that Hillary Clinton’s a liar, she can’t be trusted and now the two faces of Hillary are coming out – the fact through Wikileaks she says one thing and….”

The feed is then immediately cut.

Cuomo continued the discussion with pro-Hillary Congressman Hakeem Jeffries for a full two and a half minutes before Collins returned. Cuomo was sure to ask Collins a question that would steer him away from the subject of Wikileaks. Collins was only then allowed to speak for a brief time before the segment ended.

The YouTube clip above also points out that it was CNN’s Chris Cuomo who stoked controversy earlier this week by implying that it was illegal for the public to read Wikileaks emails and that only the media should be allowed to do so.

CNN implies it's illegal for their viewers to dig through Wikileaks emails….. whatever you learn must be from us.

In an article published yesterday, CNN also downplayed the Wikileaks emails, insisting that they didn’t reveal any damaging scandals.

The article was co-written by Dan Merica, who was revealed in the Podesta email release to be a personal favorite of Hillary Clinton.

“Dan Merica asked her if she was jealous that she didn’t get [Chris] Christie’s endorsement, to which she responded with a prolonged smile (you could see the gears turning), and then said ‘Dan, I really like you. I really really like you.’ They are basically courting each other at this point,” wrote Nick Merrill, Clinton’s traveling press secretary.

This is not the first time that a live feed on CNN has been lost right as damaging information about Hillary Clinton is about to be revealed.

Back in July, CNN reporter Brianna Keilar began talking about Hillary’s support for anti-crime legislation in the 90’s which contributed to the “mass incarceration” of black people, before the video was immediately cut.