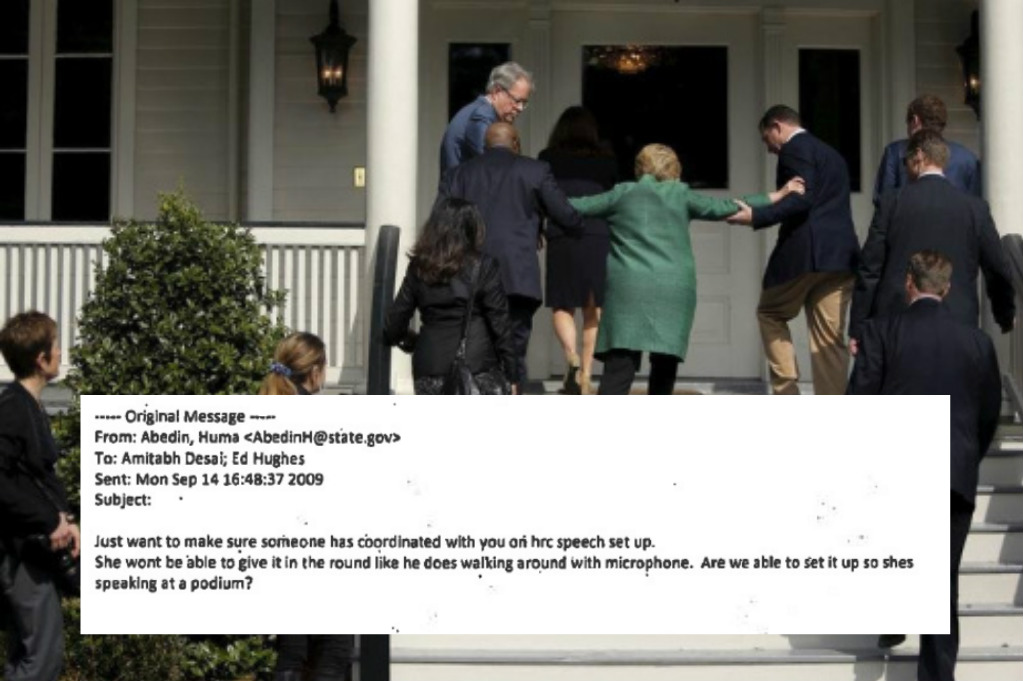 Hillary’s problems with walking and standing actually date back 7 years, to at least 2009.

Edmund Kozak reports for PoliZette, Oct. 18, 2016, that emails obtained by Citizens United through a Freedom of Information Act (FOIA) request and released on Tuesday indicate that walking around a stage and speaking without a podium to hold onto may have been a problem for Hillary Clinton as early as 2009.

Note: Citizens United is a conservative 501(c)(4) non-profit organization chaired by David Bossie, who is also the deputy campaign manager of the Donald Trump presidential campaign.

In a Sept. 14, 2009 email to Amitabh Desai and Ed Hughes, employees of the Clinton Foundation’s Clinton Global Initiative, Hillary’s top aide and rumored lesbian lover Huma Abedin revealed that Hillary could not walk around the stage like her husband Bill and would need a podium for an upcoming address:

“Just want to make sure someone has coordinated with you on hrc [Hillary Rodham Clinton] speech set up. She won’t be able to give it in the round like he [Bill Clinton] does walking around with microphone. Are we able to set it up so shes speaking at a podium?”

“I’m worried that will be an issue for her. Can we do a half round or something?”

The email exchange suggests that as early as 7 years ago, Hillary already had trouble walking around on a stage, and with speaking without a podium or surrounded by an audience.

Hillary’s need for a podium is also revealed in a more recent email from Huma Abedin to Dan Schwerin, which was released by Wikileaks.

In that email on October 22, 2015, Abedin asked Hillary’s speechwriter, Dan Schwerin, to cut the 2-minute long speech he had drafted for Hillary by half because Hillary would face “a bank of Mics [microphones] and no podium.” Here’s a screenshot of the email exchange:

As explained by Breitbart.com, Dan Schwerin, Director of Speechwriting for Clinton’s campaign, had sent Abedin a draft of a “post-game statement” Hillary could make to the press after her testimony before the House Benghazi Committee in October 2015. Schwerin had drafted a 253-word statement, which would take the average speaker less than two minutes to deliver. But Abedin still asked Schwerin to shorten the speech by half because Hillary would not have a podium.

All of which suggests that Hillary Clinton, who means to be POTUS — a very stressful job that visibly aged every president — does not have the stamina to stand without the help of leaning on a podium for even two minutes.

Meanwhile, another email recently released by WikiLeaks indicates that Hillary’s van is equipped with a bed. The April 14, 2015 email from T. Brody is a forward of a National Review article describing Hillary’s vehicle as a Secret Service-owned and -operated luxury 2014 Chevrolet Express van, outfitted with heated leather seats and a sofa that converts into a bed. (H/t Gateway Pundit)

Hillary’s van actually has more than a bed. According to an investigation by National Enquirer, “insiders” say the van is more like an ambulance, equipped with:

“Sources” also told the Enquirer that Hillary has a personal Emergency Medical Services team — a squad of local ambulance workers in bulletproof vests who follow Hillary at her appearances.