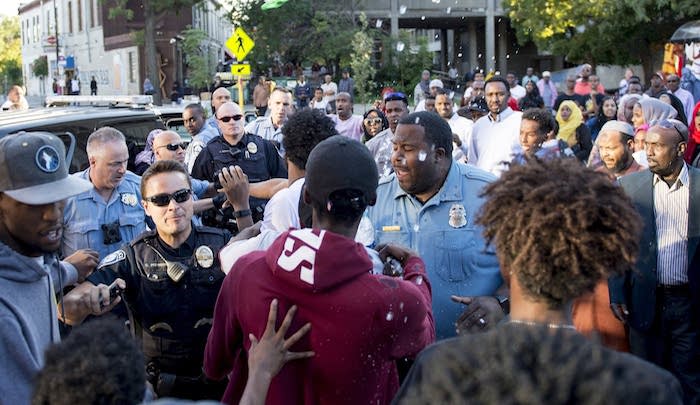 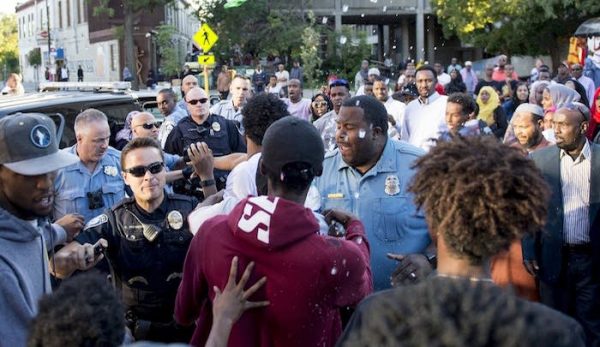 Hollywood could never be accused of being brave in covering the jihad threat. Because they don’t. Post 9/11, consider the almost non-existent offerings of Hollywood productions where jihad is even mentioned. It’s astonishing, considering this is the gravest threat to freedom. And most certainly, there is no greater threat to freedom of speech and freedom of expression than Islamic law.

Clearly fear is at work in a town not known for its bravery or principles.

And Muslims in America mean to keep it that way. Under the cloak of the fiction of “islamophobia,” they enforce the most vicious and brutal ideology on the face of the earth, the Shariah, with violence. It’s why devout Muslims opened fire on our free speech event in Garland, Texas, and continue to plot to kill me.

On Saturday, Ibrahim donned a purple scarf and grabbed a bullhorn to describe to the crowd what she anticipated from the cable TV show. ‘It’s going to be talking about how the Somali kids in Cedar are terrorists!’ she cried.”

And so to prove that Somali kids in Cedar are not terrorists, they threw a glass bottle, rocks and a chair at police officers. “A Metro Transit police officer was hit in the head with an unknown object.”

“Protests break out in Minneapolis over HBO production,” by Laura Yuen, MPR News, September 12, 2016 (thanks to Creeping Sharia):

With yet another Hollywood tale about Somalis in the works, a young generation of activists in Minnesota asks: Why must it be about terrorism? And this time, they’re directing their anger at one of their own.

Rapper and singer K’naan faced a hostile reception from dozens of Somali-American protesters on Saturday at a block party in Minneapolis. He had just begun performing on a stage on Cedar Avenue, the beating pulse of the East African community, when demonstrators essentially shut him down.

The source of their hurt is K’naan’s latest project, an HBO series that several media reports have described as a drama about jihadi recruitment set in Minnesota, which also involves director Kathryn Bigelow.

“Him being a Somali, I would expect more of him,” said Filsan Ibrahim, 27, one of the organizers of the protest. “He has such a big platform. He could use his name and celebrity to change that narrative and say, ‘There’s more to us.’”

On Saturday, Ibrahim donned a purple scarf and grabbed a bullhorn to describe to the crowd what she anticipated from the cable TV show. “It’s going to be talking about how the Somali kids in Cedar are terrorists!” she cried.

Someone next to her held up a sign that read, “Stop exploiting the Somali community.”

K’naan left the stage before making a comment about “ignorant” people….

On Saturday, a number of Minneapolis police were working off-duty to secure the event. Ibrahim, the activist, said some officers began pushing the demonstrators.

Mohamed said he observed some individuals in the crowd throw items at police, including a football and what looked to be a glass bottle. Officers sprayed a chemical irritant, sending people to flush their eyes with containers of milk.

Minneapolis police Sgt. Catherine Michal said some also hurled rocks and a chair at officers. A Metro Transit police officer was hit in the head with an unknown object and was treated and released at a nearby hospital before finishing his shift, said the agency’s spokesman Drew Kerr.

By the end of the day, Minneapolis police arrested a 17-year-old boy and a 27-year-old woman on suspicion of riot. As of late Monday, which was the Muslim holiday of Eid al-Adha, the woman was being held at the Hennepin County jail. She could face gross misdemeanor charges on Tuesday….