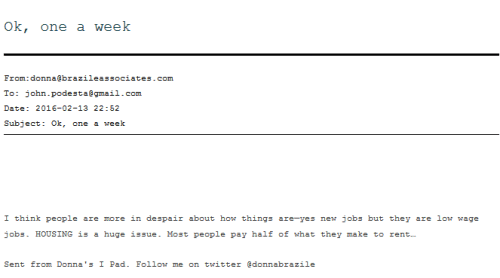 Yesterday, I received a rare phone call from my brother. He just needed to commiserate with the only person he knows who isn’t liberal and who shares his political views about the upcoming presidential election.

He complained that his wife, their two adult sons, and his friends all support Hillary Clinton and think Obama is great.

I said, “Have you asked them why they like Obama?”

He answered, “They say the economy is great! Unemployment is low, interest rates are low, the economy recovered from the recession.” He also said that his wife thinks Donald Trump is “crazy”.

Not surprisingly, they get their news from the MSM and don’t pay attention to the Alternative Media. God help us from intentionally low-information voters, otherwise called useful idiots.

So this post is for my brother. Perhaps he can email this to his sons, wife, and friends. (Probably not. This is the same brother who was silent in 2008 when one of his friends, whom I don’t know, accused me of being “evil” and a “racist”. My brother had forwarded an email from me, without my consent, of a photo of Obama carrying Fareed Zakaria’s then-recently published book, The Post-American World. My brother then very helpfully forwarded his friend’s email to me, in which his friend called me an “evil racist”.)

Donna Brazile, a longtime Democrat apparatchik who, in July 2016, replaced Congresswoman Debbie Wasserman-Schultz as Chair of the Democratic Party Committee, sent an email to John Podesta, Chair of Hillary’s 2016 presidential campaign committee, in which Brazile said:

“I think people are more in despair about how things are – yes new jobs but they are low wage jobs… HOUSING is a huge issue. Most people pay half of what they make to rent…”

Here’s a screenshot of Brazile’s email from WikiLeaks:

What Brazile wrote in her email is confirmed by a recent Harvard University Business School study, “Problems Unsolved & A Nation Divided: The State of U.S. Competitiveness 2016,” which found that the Obama economic recovery is a myth. As the 72-page report’s title suggests, not only has the economy not recovered from the 2008 recession, it has continued to deteriorate.

In the words of the report’s authors Michael E. Porter, et al.:

“America retains and enjoys many strengths. However, various economic indicators show that the U.S. economy has failed to deliver strong growth and shared prosperity for nearly two decades. These structural issues pre-date the Great Recession and are compounded by political paralysis. […]

While a slow recovery is underway, fundamentally weak U.S. economic performance continues and is leaving many Americans behind. The federal government has made no meaningful progress on the critical policy steps to restore U.S. competitiveness in the last decade or more. […]

U.S. competitiveness has been eroding since well
before the Great Recession. America’s economic
challenges are structural, not cyclical. The weak
recovery reflects the erosion of competitiveness, as
well as the inability to take the steps necessary to
address growing U.S. weaknesses.

Our failure to make progress reflects an unrealistic and ineffective national discourse on the reality of the challenges facing the U.S. economy and the steps needed to restore shared prosperity. Business has too often failed to play its part in recent decades, and a flawed U.S. political system has led to an absence of progress in government, especially in Washington.”

You can read the report here.

For those who prefer charts instead of words, the following charts from the Harvard study on the U.S economy — on labor force participation, job creation, news business formation, productivity, household income, entitlements vs. investments — all show a continuing decline under the Obama presidency:

Donald Trump is right in his concluding remarks at the third presidential debate last Wednesday, Oct. 19, 2016, on why the American people should elect him as president:

“When I started this campaign, I started it very strongly. It’s called ‘Make America Great Again’. We’re going to make America again. We have a depleted military, it has to be helped, it has to be fixed. We have the greatest people on earth in our military. We don’t take care of our veterans. We take care of illegal immigrants — people that come into the country illegally — better than we take care of our vets. That can’t happen. Our policemen and women are disrespected. We need law and order, but we need justice too. Our inner cities are a disaster: you get shot walking to the store; they have no education, they have no jobs. I will do more for African Americans and Latinos than she can ever do in ten lifetimes. All she’s done is talk — to the African Americans and to the Latinos. But they get the vote and then they come back, they say ‘we’ll see you in four years.’ We are going to make America strong again. We are going to make America great again, and it has to start now. We cannot take four more years of Barack Obama, and [pointing to Hillary] that’s what you get when you get her.“

Donald Trump is not perfect. But if you’re sick of what’s been happening to this country for the last 8 or more years, if you are no better, or even worse, since Obama became president in 2008, then voting for Hillary Clinton is the stupidest thing you can ever do.

Listen to what she says: Hillary Clinton has no new ideas. If you elect her, you’ll get not only four more years of Obama, America will be saddled with a predominately left-wing Supreme Court who will set this country’s course for generations to come.