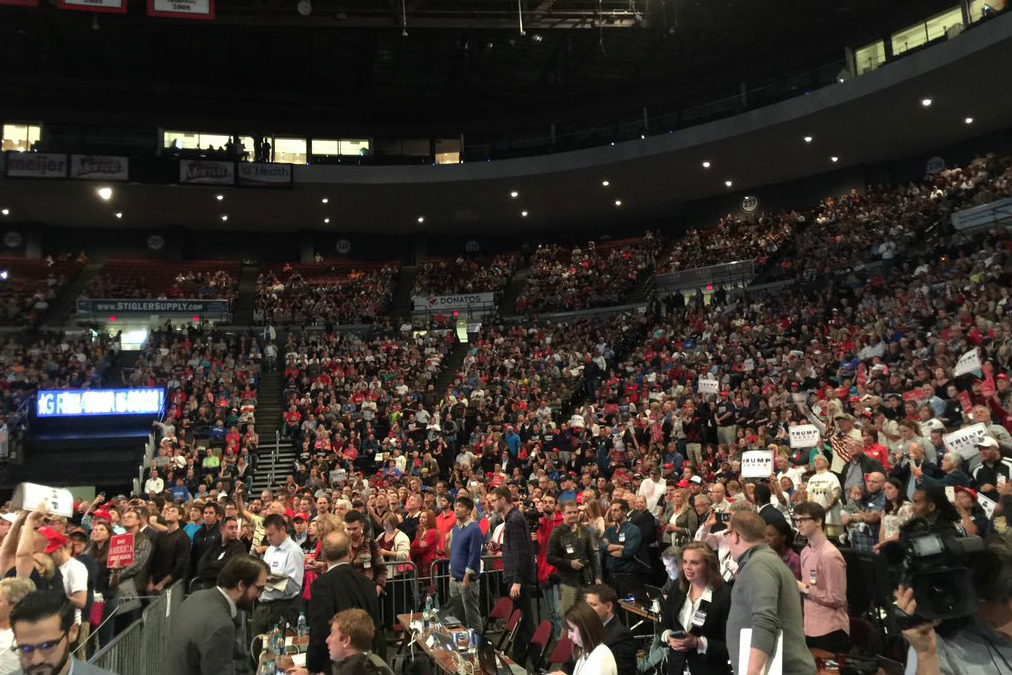 (INTELLIHUB) — If you are going by real numbers and not corporate media propaganda that is spewed forth to us via the T.V., Donald Trump will win the general election by a landslide.

And when I say real numbers, I mean real numbers. It’s that simple. Let me take a moment to explain.

You see, we can simplify everything just by casting away faked poll numbers, media lies and propaganda. It’s really that simple.

Let’s do this. Let’s judge the potential outcome of the election another way — in a simplified manner. Let’s go by rally attendance.

First off, we have to consider that physical participation at rallies will in fact reflect voters eagerness to make it to the polls on Election Day and should somewhat reflect on a per capita basis which candidate is actually more popular in the real world.

For example: If only 200 people attend the average Hillary Clinton rally vs. the 3000 to 20,000 people physically attending Donald Trump rallies, then in my opinion the verdict is in as these numbers should reflect participation of real people in a salable manner. You can see quite the contrast here.

Now let’s run the math. And hey, what the Hell, let’s even give Hillary the benefit of the doubt and average Trump rally attendees at an extremely low number of only 1000 on an average to Hillary’s 200, just to demonstrate a simple point.

So you see? Now imagine what the ratio would be if we factored more accurate numbers into the equation, which would be more like and average of 4000 Trump attendees per rally vs. Hillary’s 200 or so. By using this logic we can apply it on a larger scale to demonstrate who will likely turn out to the polls and vote on Election Day. And by doing this the numbers show Donald J. Trump winning by a landslide. However, we all know that the Establishment will not go down without a fight and plans to do everything in their power to insert Hillary as the next POTUS, because after all she is clearly the Establishment’s pick.

Do we live in a fixed virtual reality?

Hillary supporter and media shill Abby D. Phillip of the Washington Post tweeted during a Hillary rally, back in August, that there was a “boisterous crowd” in attendance and even tweeted a picture which made the crowd look big.

But, come to find out, not that many people actually attended the rally that day, which seems to be a norm for nearly all Clinton rallies.

Here are images of what Trump rallies look like:

"He {@realDonaldTrump} is on an island." @DonLemon

My daughter and I attended #TrumpRally today WPB, Fl! It was a full-house! People were pumped 4 @realDonaldTrump #TrumpPence16 #MAGA pic.twitter.com/RY7cOy8z1W

Now according to Reuters, “U.S. intelligence and law enforcement officials are warning that hackers with ties to Russia’s intelligence services could try to undermine the credibility of the presidential election by posting documents online purporting to show evidence of voter fraud.” But you see? This is just a PSYOP, another media trick to fool the populace into believing that any “voter fraud” pertaining to the election will be perpetuated by Russian hackers and not the Establishment. They want you to believe that Hillary actually won the election when they tell us ‘she won,’ despite the fact that the system is rigged.

Watch as this electronic voting machine gets hacked in 60 seconds

“Watch as the ROM is swapped out in this electronic voting machine in about a minute,” Lexi Morgan of Intellihub wrote.

“Makes you have so much faith in our system; doesn’t it?”

There are only a few logical things that may happen now leading up to the General Election, so what we have to take a close look at is how the Establishment will try and remain in power at all costs. I mean, you didn’t think they would give up without a fight did you? And there are only so many options for them on the table right now after being Trumped (pardon the pun), which I will cover herein.

If you think of the United States as a board game and all of our politicians as game-pieces — you will likely have a better understanding of how the Establishment works.

In fact the powers-that-be, the puppet masters, that run the Establishment, actually think of politicians as their game pieces and they relate the board to America. In fact this would make the citizenry the players, in a sense, especially if them citizenry chose to play the game by acknowledging the Establishments fallacious power.

At any given time the Establishment can chose to play any one of several hands that are often always on the table. It’s also safe to say the Establishment controls both sides — both the Democratic and Republican parties. They have already ‘salted’ the U.S. Government and are using the a union/mafia template, the media and Deep State as an apparatus of control. At any given time a high number of top-level official are always compromised and this is what makes the Establishment so afraid of Donald Trump, because Trump is his own man and is in no way connected to the apparatus.

In fact, the Establishment is so scared of Trump that they may go all the way and pull a JFK on him if they get they opportunity, as speculated by others. If you rationally think about it, the powers-that-be would love nothing more than to crown Hillary the next POTUS with little to no effort.

But keep in mind such an event could also trigger anarchy in the U.S., allowing for the Obama Admin to possibly remain in office for an additional duration under Executive Powers that were already put into place.

The same goes if Hillary were to be indicted by the FBI over her Servergate scandal, as mentioned to me by one of my contacts Tronic. If Hillary was indicted by the FBI, this may trigger a wave of protestors who could then claim that the elections are a sham, as the self-proclaimed Democratic socialist Sanders would be the only one left to run against Trump.

We then also have to watch for the scenario that if either Trump or Hillary were to disappear, for whatever reason, some other shiny white knight would then ride in on his or her big horse and pose as the ultimate savior for the nation, which in turn would likely be an orchestrated trick.

Additionally, there is also the chance that Trump will end up facing off with Hillary in the General Election, straight up, and the Establishment will then have to do everything in their power to rig the electronic voting machines, which has been proven to be possible, to assure the Madam Secretary’s victory.

The bottom line is the Establishment slave lords are going to get down and dirty with Trump, believe that.