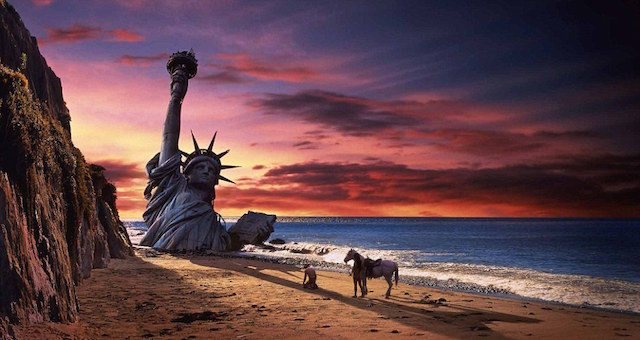 “Maintain humanity under 500,000,000 in perpetual balance with nature.” ~Georgia Guidestones

This is one of the first of ten commandments blazoned across the Georgia Guidestones, an occult monument for which no person or organization has taken credit. Though the monument was commissioned by someone named R.C. Christian more than two decades ago, the true identity of the person who built this specter is still unidentified, and the message is but one of the many examples of a cabalistic desire to cull the population.

There are many more ‘hidden’ in plain sight.

Though some of these commandments seem harmless enough, the very first describes the supreme sentiment of the mysterious group of masons who erected the stones. If you want further narrative for what they bode, you don’t have to look far. As Stanford University Professor, Paul Ehrlich, the author ofThe Population Bomb states,

“The first task is population control at home. How do we go about it? Many of my colleagues feel that some sort of compulsory birth regulation would be necessary to achieve such control. One plan often mentioned involves the addition of temporary sterilants to water supplies or staple food. Doses of the antidote would be carefully rationed by the government to produce the desired population size.”

We can see clearly that the ‘elite’ class, intent on ridding the planet of its burdensome load, has already poisoned the water of 42 out of 50 states with lead. Pesticides and fertilizers poison the remaining states’ water along with the original 42 states. Male infertility is rising due to these contaminants, and premature births along with miscarriage are more common due to others. If the water doesn’t kill you, it will simply lobotomize you, or at least start the process. Harvard medical has pronounced that fluoridated water lowered IQ scores in children who drank it, and aluminum along with fluoride is a known neurotoxin, also contributing to the rising numbers of Alzheimer’s, Parkinsons, and similar neurodegenerative diseases.

Should poisoning the water be insufficient to keep the population down, we can look to the advice of David Brower, once Executive Director of the Sierra Club and founder of the Friends of the Earth. He suggests that,

“Childbearing [should be] a punishable crime against society, unless the parents hold a government license … All potential parents [should be] required to use contraceptive chemicals, the government issuing antidotes to citizens chosen for childbearing.”

Forced and coerced sterilization at the hands of the Eugenics Board and other bodies is nothing new. Some investigators recently found that 148 female inmates in two California prisons were sterilized between 2006 to 2010 — and there may be 100 more incidents dating back to the late 1990s. One reporter wrote,

“The women were signed up for the surgery while they were pregnant and housed at either the California Institution for Women in Corona or Valley State Prison for Women in Chowchilla, which is now a men’s prison.

Former inmates and prisoner advocates maintain that prison medical staff coerced the women, targeting those deemed likely to return to prison in the future.

Crystal Nguyen, a former Valley State Prison inmate who worked in the prison’s infirmary during 2007, said she often overheard medical staff asking inmates who had served multiple prison terms to agree to be sterilized.

Today vaccines are used in a similar manner to help cull the population against their informed consent. Eugenicist, Bill Gates tried to ‘field test’ his HPV vaccine in India on indigenous young girls, but the Indian government eventually brought a stop to this. The Rockefeller family also quietly funds vaccines that alter a woman’s hormones to make her less likely to become pregnant or to maintain a pregnancy. A book titled Disciplining Reproduction by Adele E. Clark explains what the elites were planning as early as the 1930s.

“Other lines of current immunological contraceptive research continue to seek what, during the 1930s, Max Mason of the Rockefeller Foundation called “anti-hormones”: vaccines to block hormones needed for very early pregnancy and a vaccine to block the hormone needed for the surface of the egg to function properly.”

“A program of sterilizing women after their second or third child, despite the relatively greater difficulty of the operation than vasectomy, might be easier to implement than trying to sterilize men.

The development of a long-term sterilizing capsule that could be implanted under the skin and removed when pregnancy is desired opens additional possibilities for coercive fertility control. The capsule could be implanted at puberty and might be removable, with official permission, for a limited number of births.”

A simple look at the peer-reviewed Plos One site offers over 7,500 additional scientific articles that connect vaccines to sterilization.

Should vaccines or forced implants be insufficient to reduce the number of ‘useless eaters’ in the world, as Henry Kissinger has implied, then there is also the revealing text of Dr. John Colemann, who outlines the aims of a Committee of 300, otherwise known as the original hierarchical organization to plan a New World Order. Among their plans are genocide, war, the installation of dictators, the legalization of drug use, and the normalizing of pornography:

“To bring about depopulation of large cities according to the trial run carried out by the Pol Pot regime in Cambodia. It is interesting to note that Pol Pot’s genocidal plans were drawn up in the US by one of the Club of Rome’s research foundations, and overseen by Thomas Enders, a high-ranking State Department official. It is also interesting that the committee is currently seeking to reinstate the Pol Pot butchers in Cambodia.

“….To cause by means of limited wars in the advanced countries, by means of starvation and diseases in the Third World countries, the death of three billion people by the year 2050, people they call ‘useless eaters.’ The Committee of 300 (Illuminati) commissioned Cyrus Vance to write a paper on this subject of how to bring about such genocide. The paper was produced under the title “Global 2000 Report” and was accepted and approved for action by former President James Earl Carter, and Edwin Muskie, then Secretary of State, for and on behalf of the US Government. Under the terms of the Global 2000 Report, the population of the US is to be reduced by 100 million by the year of 2050.

“……To encourage, and eventually legalize the use of drugs and make pornography an ‘art-form,’ which will be widely accepted and, eventually, become quite commonplace.”

Look no further than Syria, Iraq, Afghanistan, Turkey, and a myriad other examples of false flag terrorism. Look no further than the top twenty pharmaceutical companies (all U.S., Illuminati based) that control almost 99 percent of the world’s massive, ‘legalized’ drug trade. See clearly, the genocide happening around the globe, and the child sex trafficking and pornography which is silently abided in Hollywood, Washington, and in every government circle run by cabal-funded individuals.

Look at the money usurped for the task of culling the masses, as former U.S. Secretary of State and presidential nominee, Hillary Clinton has stated:

“This year, the United States renewed funding of reproductive healthcare through the United Nations Population Fund, and more funding is on the way. The U.S. Congress recently appropriated more than $648 million in foreign assistance to family planning and reproductive health programs worldwide. That’s the largest allocation in more than a decade – since we last had a Democratic president, I might add.”

Without mention of contaminated food, DARPA contrived control devices, and further attempts to make slaves of the remaining sheeple who live through these demonic efforts, know this; you are swimming in the depopulation agenda. The effects are all around you, and it is high time to put up some kind of resistance.

This article (Hidden in Plain Sight – The Global Depopulation Agenda) was originally created and published by Waking Times and is published here under a Creative Commonslicense with attribution to Nathaniel Mauka and WakingTimes.com. It may be re-posted freely with proper attribution and author bio.