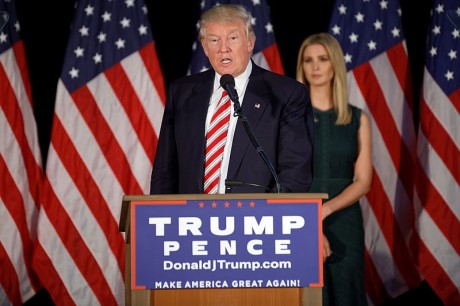 Some of these polls are going to turn out to be dead wrong.  With just over two weeks to go until election day, some surveys are showing a very tight race, while others say that Hillary Clinton has a massive lead.  For example, the tracking polls put out by Rasmussen, the L.A. Times and IBD/TIPP have all consistently shown that the race is either tied or Donald Trump is winning by a small margin.  But Fox News has Hillary Clinton ahead by six points, Bloomberg has Clinton ahead by nine points, and the latest ABC News/Washington Post poll has Clinton ahead by twelve points.  So what in the world is going on here?  If the latest ABC News/Washington Post poll is correct, we are likely to see a landslide of historic proportions for Clinton, and this is what many of the experts are now projecting.  But if Rasmussen and the L.A. Times are correct, the race could easily go either way.  So who are we supposed to believe?  Could it be possible that some of the polls are rigged against Trump?

Well, when you take a closer look at the latest ABC News/Washington Post poll, it does appear that it is not as accurate as it could be.  It turns out that those that conducted the survey purposely included 9 percent more Democrats than Republicans…

“METHODOLOGY – This ABC News poll was conducted by landline and cellular telephone Oct. 20-22, 2016, in English and Spanish, among a random national sample of 874 likely voters. Results have a margin of sampling error of 3.5 points, including the design effect. Partisan divisions are 36-27-31 percent, Democrats – Republicans – Independents.”

But as Zero Hedge has pointed out, registered Democrats have never outnumbered registered Republicans by 9 percent at any point over the last several decades.

So how in the world can ABC News and the Washington Post possibly justify their methodology?

The first observation is that both polls are heavily skewed towards Democrats. At a high level, the FOX poll consists of 43 Dems to 36 Reps to 21 Other while the NBC poll shows 44 Dems to 37 Reps to 19 Other.

By selecting more Dems the polls are designed to provide a Dem result.

Our experts next analyzed the data and calculated results using the same data from the two surveys on a split of 40 Dems, 40 Reps and 20 Other. The results show that using either sets of data Trump comes out ahead with a larger margin of victory using the FOX data.

Why would these major news organizations purposely try to give us distorted results?

One reason to do this would be to try to discourage Trump voters.  If they believe that Donald Trump is going to lose big, that might discourage some of them from going out to vote.

This should not be happening.  There is no way in the world that there should be a 14 point difference between scientific polls at this stage in the game.  On November 8th the polling organizations that were way off are going to be exposed, and it will be exceedingly difficult for them to regain their credibility afterwards.

At this point, some of the largest news organizations in the country are openly projecting a Clinton landslide.  For example, Reuters says that Clinton now has a 95 percent chance of winning…

Democratic presidential nominee Hillary Clinton is on a definite path to the White House, according to the latest Reuters/Ipsos States of the Nation poll.

The survey, released Saturday, found that Clinton is on track to win more than 300 votes in the Electoral College, which would solidly secure her the presidency. If the election were held this week, Clinton would win 326 Electoral College votes while Trump would win only 212, the poll said.

According to Reuters, Clinton currently has a 95 percent chance of winning the White House.

If Reuters isn’t right about this they are going to end up looking awfully foolish.

An analysis by the Associated Press also has Clinton as the overwhelming favorite.  And it is true that the poll results coming out of individual states seem to show Clinton with a seemingly insurmountable lead on the electoral map.

But once again, can we trust those polls?

Trump has regularly dismissed the national polls, but on Sunday his campaign manager did admit on national television that they are losing.  The following comes from the New York Post…

Donald Trump’s campaign manager on Sunday acknowledged something her boss hates to do — losing.

“We are behind,” Kellyanne Conway admitted on NBC’s “Meet the Press.”

The GOP nominee routinely brushes off negative polling as untrustworthy but Conway said Democrat Hillary Clinton does have an edge.

However, it is important to remember that the big national polls have been very wrong in the past.  Back in 1980, a Gallup survey that was released on October 26th showed Ronald Reagan trailing Jimmy Carter by 8 points, but of course Reagan went on to win the election by a landslide…

“For weeks before the presidential election, the gurus of public opinion polling were nearly unanimous in their findings,” wroteJohn F. Stacks for TIME in April 1980. “In survey after survey, they agreed that the coming choice between President Jimmy Carter and challenger Ronald Reagan was ‘too close to call.’ A few points at most, they said, separated the two major contenders.

“But when the votes were counted, the former California Governor had defeated Carter by a margin of 51% to 41% in the popular vote — a rout for a U.S. presidential race. In the electoral college, the Reagan victory was a 10-to-1 avalanche that left the President holding only six states and the District of Columbia.”

Could a similar thing happen on November 8th?

Without a doubt, Trump supporters are far more enthusiastic than Clinton supporters are, and that matters.  The key on election day is to get your voters to turn out in large numbers, and the fact that Donald Trump is drawing record crowds to his rallies is a very good sign.

But even if Donald Trump legitimately wins the election, it could still be stolen from him via election fraud.

In recent days Democrats have been playing down the idea that this could possibly happen, but the truth is that even Barack Obama has admitted that election fraud is a major problem in the past.  For instance, just consider what he said about this back in 2008…

“Well, I tell you what it helps in Ohio, that we got Democrats in charge of the machines,” Obama said regarding the threat of election-rigging.

He continued, “Whenever people are in power, they have this tendency to try to tilt things in their direction. That’s why we’ve got to have, I believe, a voting rights division in the Justice Department that is nonpartisan, and that is serious about investigating cases of voter fraud.”

“That’s why we need paper trails on these new electronic machines so that you actually have something that you can hang on to after you’ve punched that letter—make sure it hasn’t been hacked into,” he added, admitting that even Democrats have “monkeyed around” with election results:

“I want to be honest, it’s not as if it’s just Republicans who have monkeyed around with elections in the past. Sometimes, Democrats have, too.”

I know that these comments almost sound too good to be true, but you can actually watch video of Obama making these comments right here.  And it is odd that he specifically mentioned Democrats having control of the voting machines in Ohio, because I documented extreme voting irregularities in Ohio in the last election during a recent visit to Morningside.

And an increasing number of Americans are starting to become concerned about election fraud.  In fact, a brand new Reuters survey found that 70 percent of Republicans believe that if Hillary Clinton wins the election it will be “because of illegal voting or vote rigging”.

So even if Hillary Clinton gets into the White House, she may find that she has an exceedingly difficult time trying to govern the nation.

A lot of people have made a lot of predictions about the outcome of this election, and we don’t have very long until we find out who was right and who was wrong.

At this point, voting has already begun in many states, and the early results in Nevadadon’t look encouraging for the Trump campaign…

According to the estimable Nevada journalist Jon Ralston, Democrats have a 20-percentage-point turnout edge so farbased on early and absentee voting in Clark County (home to Las Vegas), Nevada. And they have a 10-point edge in Washoe County (home to Reno).

But in the key swing state of Florida, so far 498,153 Republicans have voted compared to just 478,175 Democrats.  So that would seem to be some very good news for the Trump campaign, because Trump cannot win without carrying the state of Florida.

To me it seems as though Americans are more emotionally invested in this campaign than they have been in any presidential campaign in decades.

The stakes are incredibly high, and in just over two weeks we will find out what happens.

Let us just hope and pray that America makes the right choice.