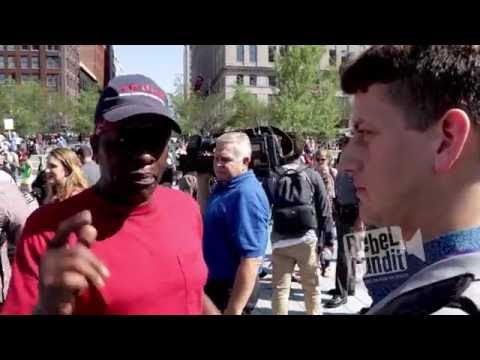 Both men are wise to the MSM’s lies.

Black man to CNN reporter: “I’m down here to make sure that I express my support for Mr. Donald Trump, and I’m fighting back against people like Black Lives Matter with CNN support, along with the Hillary Clinton Foundation and the Bill Clinton Foundation — the traitors to this country.”

CNN reporter: “What do you think about the fact that white supremacists support Trump?”

Black man: “It doesn’t matter. That’s their right to free speech. I’m sick of this racist divide, and CNN is always doing that, always divide and conquer. People have the right to choose whatever they want. What the hell that’s got to do with Donald Trump? He’s not a racist! I’m sick of that. It’s a scam, and I know it’s not going to get on CNN. We’re sick of you media.”

Reporter asks black man named Ronnie Simpson: “So why are you out here today?”

Ronnie: “You know, I am a Trump supporter. I don’t know if I would vote for him, but I have to support what he’s standing for because I’ve been seeing all this opposition coming from Bernie, Hillary supporters and sitting there talking about ‘We’re liberal, we just want peace’. Yet they throw eggs at you and punch you in the mouth because they’re peaceful and loving.

I saw what went down in Southern California. It got to me. I had to actually come out here and actually talk about what’s going on. [Note: Ronnie was referring to a man who was assaulted by a mob in El Cajon, California, for wearing a Trump “Make America Great Again” cap.]

These people don’t want to talk to you, that’s the problem. They sit there and say they don’t have double standards and they’re not hypocritical. They’ll come up to you and just yell and scream like you’re just nobody: ‘We hate you, you’re racist, you’re misogynist, you’re homophobic.’ I have black friends, I have white friends, I have Mexican friends, and supposedly I’m a racist! Wow, that’s crazy.

Bravo, my brother in the red t-shirt!