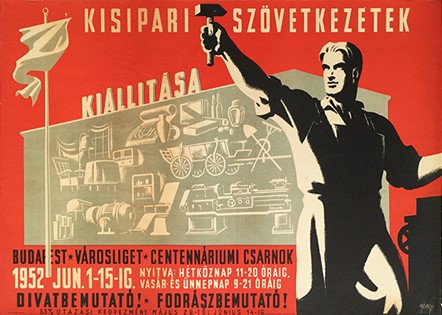 Everywhere in the western world, printed newspapers are struggling to stay afloat. The old advertising-based model is no longer sustainable as more people turn to the Internet and alternative sources for their news and analysis. Hungary is no different. But some newspapers are more equal than others, and sometimes when market forces determine that a Washington-favored newspaper overseas goes out of business it becomes a matter of “human rights” and “free expression.” That is the case in Hungary, where the former Communist Party organ’s demise this month has earned strong words of scorn from the US State Department.

The newspaper Nepszabadsag (ironically, “People’s Liberty”) was founded by the Hungarian Communist Party in the midst of the 1956 revolution, a revolt where Hungarians rose up to pull themselves out from behind the iron curtain.  For the next 30 plus years Nepszabadsag was the official mouthpiece of the Communist Party, until shortly after the Berlin Wall fell. It was subsequently acquired by Bertelsmann AG, a German media conglomerate, in the early 1990s. But while there was a “system-change” in Communist Party monopoly rule in Hungary, there was never a “system-change” in Hungary’s former Communist Party mouthpiece.

The Communists renamed themselves “Socialists” and continued to play a leading role in Hungarian political life, winning the second post-communist election in 1994. Their newspaper Nepszabadsag remained at their side, lock-step loyal to the renamed communists and their allies. German businessmen who owned the paper did very little, as loyal former party members kept their subscriptions up and circulation high. What’s not to like if you are a German businessman?

But as elsewhere that all began to change. First off, in 2010 the anti-communist and moderately nationalist Fidesz party won the elections and established itself as a formidable force in Hungarian political life. A 2014 re-election solidified Fidesz as the leading political power in Hungary, led by the populist firebrand Viktor Orban who had in mid-1989 taken the dramatic and dangerous step of publicly demanding that Soviet troops exit the country.

Orban’s recent strident refusal to accept EU diktats (reminiscent of Moscow diktats of old) on how many Middle Eastern refugees fleeing Washington’s wars it should accept and bring into its welfare system further bolstered his popularity in Hungary and throughout the emerging anti-Brussels movements in EU countries (National Front in France, AfD in Germany, etc.). In a nationwide referendum earlier this month on whether to accept Brussels’ demands that Hungary accept thousands more refugees, Hungarians voted “no” by a convincing 98 percent (turnout was just under 50 percent, rendering the vote technically invalid but still indicative of the mood in the country).

As a result of Fidesz’s overwhelming popularity in Hungary, the renamed Communist Party’s poll numbers sunk. According to some polls last month, the Hungarian Socialist Party had support of just ten percent of the population, dwarfed by Fidesz at near 50 percent and the radical populist Jobbik Party at near 20 percent.

As might be expected when a political party implodes, readership and revenue of its mouthpiece also declines. That is why Nepszabadsag racked up more than five billion forints ($17.6 plus million) in losses recently and its current owner, Mediaworks Hungary Zrt., decided to close the loss-leading publication.

Simple, right? The market decided that Nepszabadsag would not survive and the owner followed the people’s choice, shutting down the paper.

Not so simple. The US government has been strongly opposed to Fidesz and Viktor Orban from his 2010 victory (and earlier). They have been involved since the end of communism in supporting and propping up the renamed communists and opposing Orban and Fidesz.

Did the leader of the free world and free markets chalk Nepszabadsag’s demise up to market forces? No way! It had to have been some nefarious plot by Viktor Orban to silence criticism of his government — even though the paper’s own owners admitted that it was forced to shut the doors due to financial losses!

Thursday the State Department took time out of its busy schedule condemning the Russians for fighting al-Qaeda in Syria to condemn the Hungarian government for the market failure of a newspaper opposed to it. It is up to the Hungarian government, according to the US State Department, to make sure that opposition newspapers and other publications opposed to it remain in business.

According to the US State Department:

The United States shares the concerns of global press freedom advocates, international organizations, and Hungarian citizens, over the steady decline of media freedom in Hungary.

We are following closely the reported ban of an independent website from the parliament building on October 19 and the sudden closure of Hungary’s largest independent newspaper, Nepszabadsag, on October 8. The loss of this paper – regardless of the reason – is a blow to media pluralism in Hungary.

As a friend and ally, we encourage the Hungarian government to ensure an open media environment that exposes citizens to a diversity of viewpoints and opinions, a key component of our shared democratic values. We urge Hungary to work closely with the OSCE Representative on Freedom of the Media and other experts towards this end.

Yes, the Hungarian government according to Washington has an obligation to make sure private enterprises that happen to oppose it are flush with money and remain in operation.

Should those of us opposed to our own US foreign policy of interventionism and endless hectoring of other government overseas on press freedom now be justified in demanding a few million dollars to keep our own opposition media operations afloat? Or does American exceptionalism mean “do as we say not as we do”?

Hungarians now celebrate the 60th anniversary of their revolution against Soviet rule in which the rebels’ first demand was that Hungary escape the Warsaw Pact and become a neutral country in the East/West conflict, à la Switzerland. Perhaps having escaped diktat by Moscow only to fall prey to diktat from Washington and Brussels, Budapest should revisit that 1956 spirit and at least exit the anachronistic NATO alliance. Maybe then HUexit?