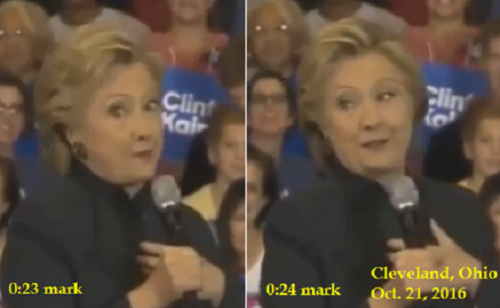 Kyle Olsen reports for The American Mirror, Oct. 23, 2016, that during two speeches this week, “Hillary Clinton broke into bizarre and fake laughter over questions about her stamina.”

At a Cleveland rally on Friday, October 21, she said, “Well, that was the third and last time that I will ever have to debate Donald Trump. I have now spent four and a half hours on stage with Donald proving once again I have the stamina to be president and Commander-in-Chief.”

Then she started cackling.

Olsen observed: “But her laughter was shown to be fake when she made similar statements to an audience the next day in Pittsburgh and devolved into similar behavior.”

As she did in Cleveland the day before, Hillary said to the Pittsburgh rally, “I mean, think about this. I have now spent four and a half hours on stage with Donald proving once again I have the stamina to be president and Commander-in-Chief.”

Then she started cackling, again, this time with double chins.

A presidential candidate is boasting that she had the stamina to stand up for a total of 4½ hours over TWO days!

We are supposed to be impressed that this wannabe Commander-In-Chief of (still) the greatest military in the world had the stamina to stand up on a stage for 2¼ hours. That’s supposed to be a great accomplishment.

I suppose it was an accomplishment for Hillary that she didn’t need two men to haul her up a short flight of stairs as she did on February 4, 2016, in Charleston, SC.

Or that she didn’t need a man to hold her up during the debates, like she did on April 16, 2016 at Southwest College, Los Angeles.

Or that during the three presidential debates, she didn’t freeze up and collapse, face down, like she did in Manhattan one month 12 days ago on September 11, 2016.

That’s how low a bar of physical fitness Hillary and her clapping-like-trained-seals millennials in Cleveland and Pittsburgh have for the President of the United States of America — that she can stand on a stage for 2¼ hours.

Meanwhile, as she was cackling over her “stamina,” Hillary’s eyes went googledegoo again.