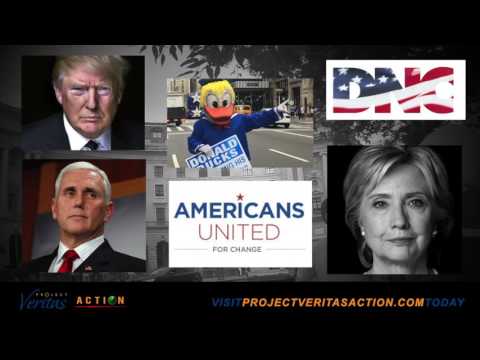 Why was James O’Keefe fearing for his life, before today’s release of the 3rd video in the Project Veritas’ vote rigging series?

Because Project Veritas has now provided a witness that confirms Hillary Clinton was personally involved, and in clear violation of FEC rules. That witness is a frequent White House visitor, Robert Creamer, who recently ‘stepped back’ from his position as an operative for the Clinton campaign.

Part III of the undercover Project Veritas Action investigation dives further into the back room dealings of Democratic politics. It exposes prohibited communications between Hillary Clinton’s campaign, the DNC and the non-profit organization Americans United for Change. And, it’s all disguised as a duck. In this video, several Project Veritas Action undercover journalists catch Democracy Partners founder directly implicating Hillary Clinton in FEC violations. “In the end, it was the candidate, Hillary Clinton, the future president of the United States, who wanted ducks on the ground,” says Creamer in one of several exchanges. “So, by God, we would get ducks on the ground.” It is made clear that high-level DNC operative Creamer realized that this direct coordination between Democracy Partners and the campaign would be damning when he said: “Don’t repeat that to anybody.” The first video explained the dark secrets and the hidden connections and organizations the Clinton campaign uses to incite violence at Trump rallies. The second video exposed a diabolical step-by-step voter fraud strategy discussed by top Democratic operatives and showed one key operative admitting that the Democrats have been rigging elections for fifty years. This latest video takes this investigation even further.