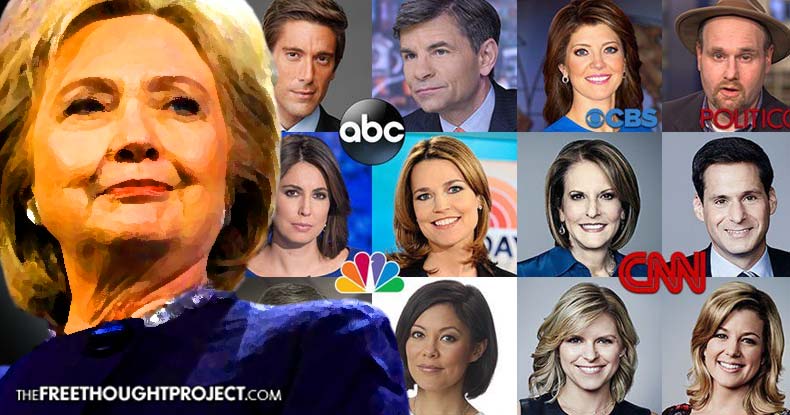 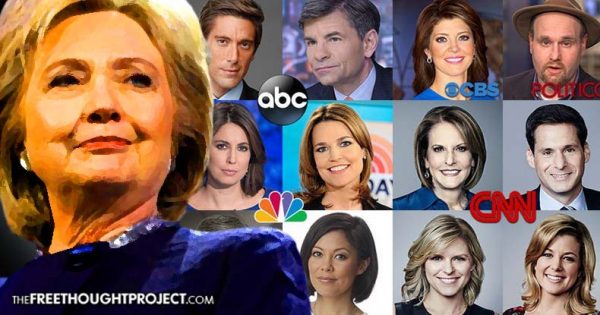 Revelations from the Wikileaks release of John Podesta’s emails yet again prove mainstream, corporate media serves as Hillary Clinton’s personal cheerleading squad — and is devoid of any iteration of journalistic integrity.

Thanks to Wikileaks and the Intercept, in fact, we now have a list of no less than 65 mainstream “reporters” whose campaign coverage constitutes propaganda for the Clinton campaign — and no wonder, considering the obscenely lopsided drivel presented by their outlets.

As (actual) journalists Glenn Greenwald and Lee Fang reported on October 9, the Intercept exclusively received documents obtained by the source known as Guccifer 2.0 evidencing Clinton campaign tactics to court journalists portraying the former secretary of state in a positive light.

“As these internal documents demonstrate,” the Intercept reported, “a central component of the Clinton campaign strategy is ensuring that journalists they believe are favorable to Clinton are tasked to report the stories the campaign wants circulated.

“At times, Clinton’s campaign staff not only internally drafted the stories they wanted published but even specified what should be quoted ‘on background’ and what should be described as ‘on the record.’”

One internal strategy document dated January 2015 — months before Clinton officially kicked off her campaign in April — with the curious heading “Earned Media/Next Steps” exposes how the campaign made an albeit infrequent practice of crafting supposed news pieces from beginning to completion.

Under the — not-at-all oblique insult to the fundamentals of journalism — heading “Placing a Story,” the memo’s author wrote:

“As we discussed on our call, we are all in agreement that the time is right [to] place a story with a friendly journalist in the coming days that positions us a little more transparently while achieving the above goals.”

Specifically named as a suggested journalist plant is Maggie Haberman of Politico, whom they note will assist in doing “the most shaping” of the narrative they have in mind.

Haberman, however, is far from the only pro-Clinton media shill. As the Intercept noted, a review of the metadata for one of the obtained documents found it had been penned by campaign communications director, Jennifer Palmieri — who created a list of ostensible pundits and journalists potentially amenable to targeting with the pro-Clinton message.

The Intercept also revealed an R.S.V.P. list of 38 media friendlies invited to a pre-campaign announcement soiree with ‘top campaign aides’ at the home of strategist Joel Benenson last year on April 10, which was “a fully off-the-record gathering designed to impart the campaign’s messaging.”

Although the outlets they represented unsurprisingly included left-leaning MSNBC, Huffington Post, and Politico, the list also includes journalists from the Daily Beast, Vice, Vox, The New Yorker, and even People Magazine. In the Wikileaks document, the true scope of Clinton campaign skulduggery is revealed in another lengthy guest list for a parallel function hosted by Mr. Leaked Emails, himself, John Podesta, on April 9 last year.

Press secretary Jesse Ferguson — who authored both lists — wrote to the top members of Clinton’s team:

“Here is the current RSVP list to the Thursday Night (4/9) dinner at Podesta’s. As a reminder, this is with the 25 reporters more closely following HRC (aka the future bus).”

Although the collusion between the media and both the Clinton campaign and Democratic National Committee has graciously trickled out thanks to leaked documents from Wikileaks and others, these lists of named journalists willing to cross the line between journalism and campaigning are shameful — if not helpful tools to know with certainty whose reporting is garbage.

In fact, besides obliterating any previous claims of unbiased journalism made by the once-prestigious media institutions dotting these lists, the names and practices described prove mainstream media is effectively moot — by its own hand.