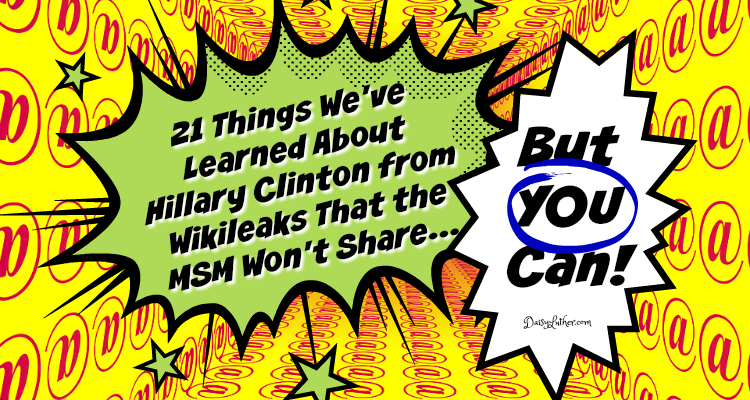 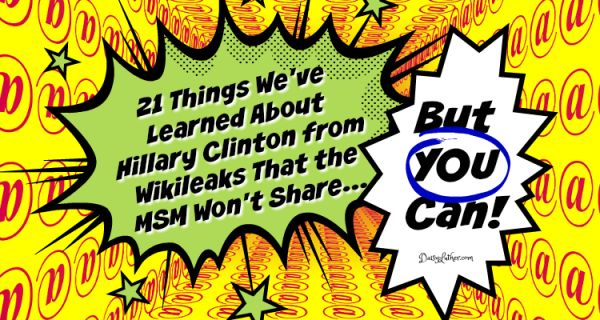 First of all, the organization was founded by Julian Assange back in 2006. Their website explains what they are all about:

“WikiLeaks specializes in the analysis and publication of large datasets of censored or otherwise restricted official materials involving war, spying, and corruption. It has so far published more than 10 million documents and associated analyses.”

In the 11 years that they’ve been publishing documents, they have not been disproven a single time. Their record for authentication is perfect. (Learn more here and here.)

So this means that a person would be pretty silly to disregard anything in the reams of information about Hillary Clinton, the Democratic Party, the Clinton Foundation, and the political shenanigans that would put the Machiavellis to shame.

Here are 21 of the most important things that have come out about Hillary Clinton, that unfortunately, no one is reporting on in the mainstream.  In the interest of brevity, each topic has a link to an article that goes deeper into the leak. (In no particular order.)

And finally, here’s the real reason that treacherous shrew is involved in politics. And let me tell you, it isn’t because she yearns to make things better for anyone but herself. (emphasis mine.)

At the Goldman Sachs Builders and Innovators Summit, Clinton responded to a question from chief executive Lloyd Blankfein, who quipped that you “go to Washington” to “make a small fortune.” Clinton agreed with the comment and complained about ethics rules that require officials to divest from certain assets before entering government. “There is such a bias against people who have led successful and/or complicated lives,” Clinton said. (source)

Together, we cannot be ignored.

I am on a mission between now and the Presidential Election on November 8th and I hope that you will join me.

I am going to work day and night to provide the coverage that the mainstream media is not. It isn’t until we combine all of our voices that we can make people listen to the scandals, the rigging, and the corruption, not only in this election but in the system in general. Please join your voice with mine by liking, sharing, and spreading the word.