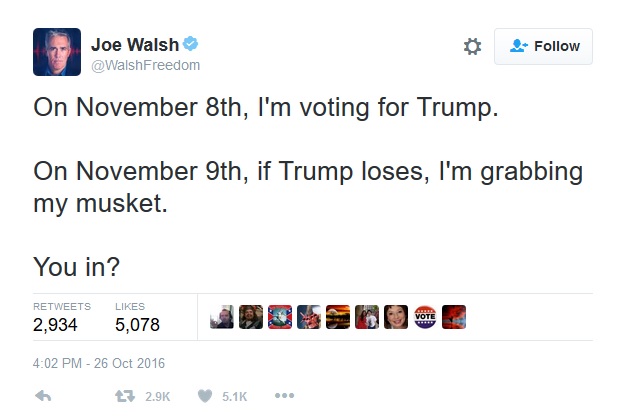 This election remains more heated than any other in modern history – and for many, it has become a call to arms, even if only metaphorically.

Despite the fact that DNC operatives have been exposed as the ones inciting violence at rallies – Robert Creamer and Scott Foval for example – and working overtime to bus in illegal voters and rig the vote – the media is going out of its way to paint Trump supporters and grassroots Americans as the ones plotting violence.

Most recently, they are latching onto comments made by former congressman Joe Walsh, now a conservative radio host, who suggested he would ‘pick up a musket’ if Trump loses the election.

On November 9th, if Trump loses, I'm grabbing my musket.

Did Walsh mean to imply violence? That is certainly how the media is portraying it, as his comments spark controversy and fuel fire to the debate over the nearing election.

The irony that his commentary drew from the imagery of founding-era patriots who stood up to tyranny was deeply lost on the left, who see opponents to Hillary in black and white terms – racist, xenophobic, utterly deplorable and inherently violent.

CNN followed up, asking Walsh what he meant by statement.

Walsh … did respond to CNN’s Jake Tapper via Twitter when he asked: “What exactly does that mean?”

“It means protesting. Participating in acts of civil disobedience. Doing what it takes to get our country back,” he responded to Tapper.

It means protesting. Participating in acts of civil disobedience. Doing what it takes to get our country back.

After a firestorm on social media, Walsh doubled down, stating on Twitter:

I'm serious. I don't think a musket would do much good these days, but it's time for civil disobedience on the right. https://t.co/ThJPEbALWZ

His heated rhetoric is a response to the endless episodes of fraud, dirty tricks and foul play by the Hillary campaign, as it seems that she will stop at nothing to become the first female POTUS –  just the sort of abuse of power that the founders warned about.

1775-76 erupted in response to a long train of abuses – acts of oppression and hostility listed in the Declaration of Independence that is being largely repeated in modern day America.

Could Hillary’s reported election victory – or Donald Trump’s defeat – signal civil unrest and a new wave of resistance, particularly if the results are widely viewed as fraudulent or “rigged”? Trump, for one, has certainly been talking up the possibility of a stolen election.

The scenario is plausible enough that the Pentagon and Homeland Security have been carrying out secret drills in the lead up to the election to prepare for the possibility of a martial law response to violence or civil unrest.

As SHTF detailed in an exclusive report, a whistleblower has come forward on the ominous contingency plan to keep and/or restore order if the populace revolt against the establishment’s “selection” for president:

If there is any truth to it, the 2016 election could be a kick-off for total tyranny.

According to an unnamed source – who has provided accurate intel in the past – an unannounced military drill is scheduled to take place during a period leading up to the election and throughout the month after.

1st Phase:  NROL (No Rule of Law) – drill involving combat arms in metro areas (active and reserve).  Source says active duty and reserve service members are being vaccinated as if they are being deployed in theatre.

At this point, no one can say for certain what will happen in the aftermath of November 8, but it is clear that millions and millions of Americans are dissatisfied with the status quo, troubled about the economic realities perpetuated by the Fed and angry that Hillary may be put in the Oval Office rather than a jail cell, despite a trail of corruption with virtually no end.

How far will things go?

And will things ever be reset without a new American Revolution?