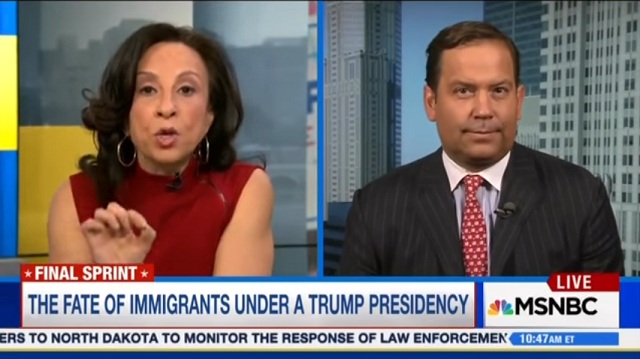 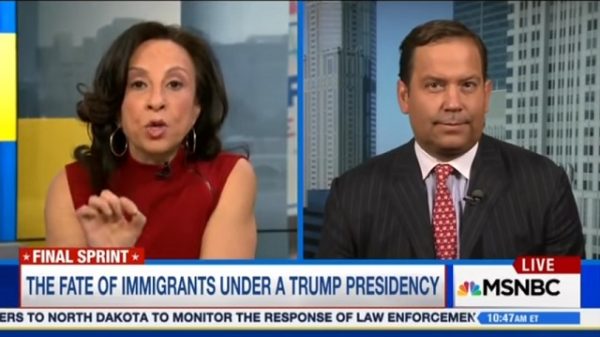 I would assume the shorter acronym “AILWPOWDITC” would also be allowed.

Via Trent Baker, we learned NPR’s anchor/activist Maria Hinojosa uncorked wacky Holocaust analogies on MSNBC on Saturday morning. Trump surrogate Steve Cortes dared to use the word “illegals” in a panel discussion, and Hinojosa made faces and broke out the language-police lecture. Somehow, it’s okay for Hinojosa to compare Trump to the Nazis and imply illegal aliens fear death camps, but you can’t say “illegal alien.”

Joy Reid asked Cortes: “What do you think the politics would look like if, let’s say, a year from now, people were watching the nightly news and seeing homes being raided and you know, screaming children being dragged out and grandmas being deported. What does that do to the politics of a party that does need to grow its nonwhite base?” Cortes said only criminal aliens should fear immediate deportation, and then used the I-word.

STEVE CORTES: Look, I’m incredibly pro immigrant, like you. The child of an immigrant, like probably many people on our panel. Immigration is a treasure to this country and the dynamism and work ethic is immeasurable. It is most unfair, though, to legal immigrants to allow illegals to hop in front of them and cheat the system. And that is what is —

REID: You were on a roll there, but Maria wants to get in.

HINOJOSA: So you are going to use — I mean, don’t know how — in fact, it was just yesterday, I think, I had to put another tweet. Illegals is not a noun. It is not a noun. You cannot —

HINOJOSA: What you can do is you can say it is an immigrant living illegally or an immigrant living without papers or without documents in this country. But what you cannot do is to label a person illegal. And the reason why I say this is not because I learned it from some radical Latino or Latina studies professor when I was a college student. I learned it from Elie Wiesel, who survived the Holocaust, who said, you know what, the first thing they did was that they declared the Jews to be an illegal people. And that’s what we’re talking about at this point. This is real fear.