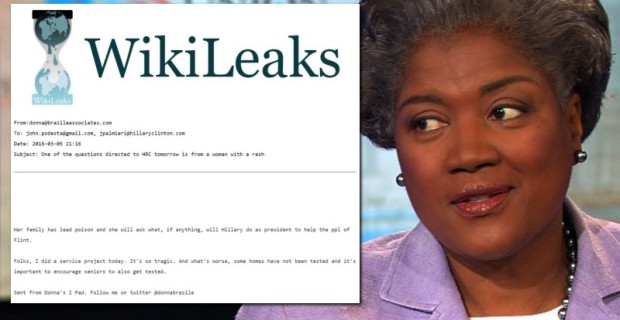 A new email released by WikiLeaks as part of the Podesta dump reveals that former CNN commentator and current chairperson of the DNC Donna Brazile gave Hillary Clinton another question the day before a major debate.

“One of the questions directed to HRC tomorrow is from a woman with a rash,” the email is titled. It was sent on March 5, the day before Clinton debated Bernie Sanders in Flint, Michigan.

“Her family has lead poison and she will ask what, if anything, will Hillary do as president to help the ppl of Flint,” reads the body of the email.

According to debate commission rules, no candidate is supposed to be given any questions in advance of a debate.

This is not the first time that WikiLeaks emails have revealed how Brazile tipped off Hillary’s campaign with debate questions in advance.

A previous email entitled, “From time to time I get the questions in advance,” gave Clinton the nod that a question would be asked about the death penalty.

The latest email completely demolishes Brazile’s claim, made during a fiery exchange with Megyn Kelly, that she didn’t receive debate questions in advance.

During the interview, Brazile appeared rattled, at one point suggesting that the email was fake or doctored, with no evidence, while claiming she was being “persecuted.”

This latest revelation provides yet more bombshell evidence of collusion between the media, specifically CNN, and the Clinton campaign.