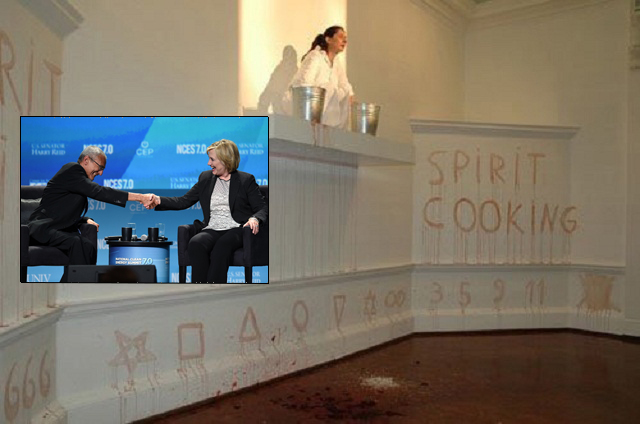 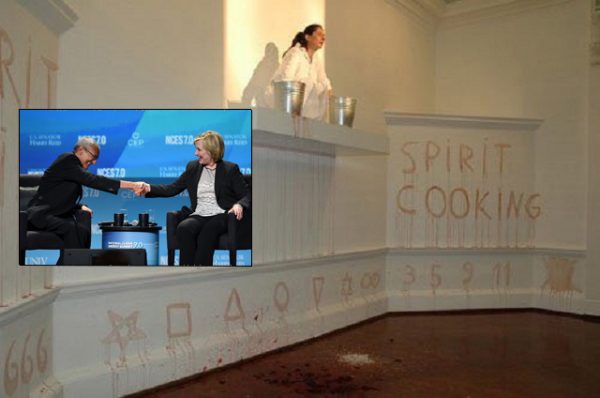 Voters might want to see this before heading out to the polls on November 8th.

It’s being called the “most bizarre Wikileaks email to date.” A leaked email from Clinton campaign manager John Podesta show John’s brother Tony inviting John and his wife Mary to take part in a “spirit cooking” dinner at the home of occult “artist” Marina Abramovic.

While you might assume spirit cooking to be something having to do with Native Americans, it’s actually some weirdo sex magick involving buckets of blood and the consuming of human excretions.

Video shared on YouTube recorded in 1997 shows Abramovic’s writing out the “spirit cooking” “recipes” on the wall of a room with “pigs blood.”

Be forewarned, the video is gross:

Redditors shared these two screenshots if you just want a glimpse, this one is less gross than this one. You can read what the ritual involves on this art gallery’s website.

Voters might want to know before heading to the polls on November 8th that this is what Hillary Clinton’s campaign manager and his brother are into.

Has Hillary Clinton herself attended one of these sick rituals?

The story is going crazy viral right now on Twitter, it’s the number one trending topic. Wikileaks themselves tweeted about it from their official account:

The Podestas' "Spirit Cooking" dinner?
It's not what you think.
It's blood, sperm and breastmilk.
But mostly blood.https://t.co/gGPWFS3B2H pic.twitter.com/I43KiiraDh

Here’s a picture of Marina Abramovic if you have any questions of what this is all about: Do the people of America really want a “spirit cooker” in the White House?