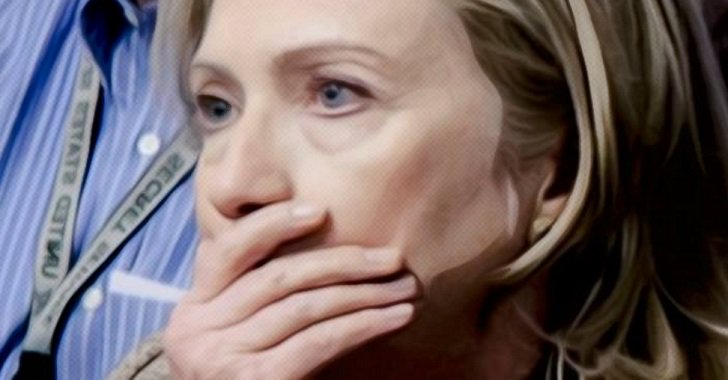 The tree of crime bears bitter fruit, and Hillary Clinton might soon be able to confirm as much. At least, that’s what Fox’s Bret Baier’s recent report seems to suggest.

Baier reported Wednesday that an ongoing FBI investigation into the Clinton Foundation is “far more expansive than anybody has reported so far,” adding that offices have been investigating claims of corruption separately.

As the probe expands, sources told Baier, individuals who have already been interviewed by the FBI are being called back, helping agents to piece together the great amount of evidence they have collected so far — which continues to grow daily. An “avalanche” of evidence, Baier says, seems to be “coming in every day.”

What Baier was unable to confirm through his sources was eventually unveiled by the Wall Street Journal.

Citing “people familiar with the matter,” WSJ writers report that Department of Justice (DOJ) officials were the ones who “kept pushing back on the investigation,” keeping FBI agents from pursuing more evidence.

Investigators had been seeking information on the Clinton Foundation’s alleged pay-to-play scheme after they listened to a recording “of a suspect in a public-corruption case talking about alleged deals the Clintons made.” But once low-level investigators within the FBI were told to stop pursuing the case, an internal feud erupted, pitting FBI investigators against the FBI’s top officials and the DOJ.

It all started with the May 2015 publication of Clinton Cash by Peter Schweizer, a book meant to detail “patterns of financial transactions that circled around decisions Hillary Clinton was making as secretary of state.” Toward the end of 2015, FBI and DOJ officials agreed to meet and discuss the Clinton Foundation before taking action. In February 2016, public integrity prosecutors, FBI officials, and Leslie Caldwell, the head of the DOJ’s criminal division, all met in Washington.

During the meeting, the prosecutors showed little interest in the presentation put together by the FBI. According to a “person familiar with the matter,” the message was: “We’re done here.”

Following the meeting, DOJ officials allegedly sent a message to all offices involved in the Clinton Foundation probe, telling them to “stand down.” But within the FBI, investigators believed they had “moved well beyond the allegations made in the anti-Clinton book,” having had access to “two confidential informants from other public-corruption investigations” who had talked to the FBI about the charity organization.

Listening to recordings of conversations with these suspects, FBI investigators believed they had enough to check the allegations further. But prosecutors saw the details as nothing but hearsay, claiming investigators lacked a strong basis to seek more aggressive tactics, such as bringing up evidence before a grand jury.

As these investigators pressed on, the DOJ “became more annoyed that the investigators didn’t seem to understand or care about the instructions issued by their own bosses and prosecutors to act discreetly,” which prompted DOJ officials to continue asking FBI investigators to step down, WSJ reports.

Finally, in August, FBI Deputy Director Andrew McCabe got a call from an unidentified senior DOJ official. During the phone conversation, McCabe was grilled because “[FBI] agents in New York seemed to be disregarding or disobeying” DOJ’s instructions, WSJ notes.

At one point, sources told WSJ, McCabe asked the senior DOJ official if the Justice Department was “telling me that I need to shut down a validly predicated investigation.” The DOJ official then allegedly said, “Of course not.”

In early 2016, the State Department’s former inspector general from 2005 to 2008, Howard J. Krongard, told reporters the agency was lying when it claimed it “didn’t know until it was too late that [Clinton] was improperly using personal emails and a private server to conduct official business.”

At the time, he argued it would be easy for the administration to lie about such a claim because any FBI criminal referral presented to the DOJ would “have to go through four loyal Democrat women,” including Caldwell, Deputy Attorney General Sally Yates, Attorney General Loretta Lynch, and top White House adviser Valerie Jarrett.

Recently, the American Center for Law and Justice (ACLJ) filed a federal lawsuit against the DOJ in order to obtain more details about a meeting held between Lynch and former president Bill Clinton.

The meeting was held just days before Lynch made a decision as to whether former secretary of state and current presidential nominee Clinton would be indicted after a year-long criminal investigation into her use of a private email server while serving under President Barack Obama.

According to the New York Post, FBI agents believe a deal was struck between Bill and Lynch during the meeting.