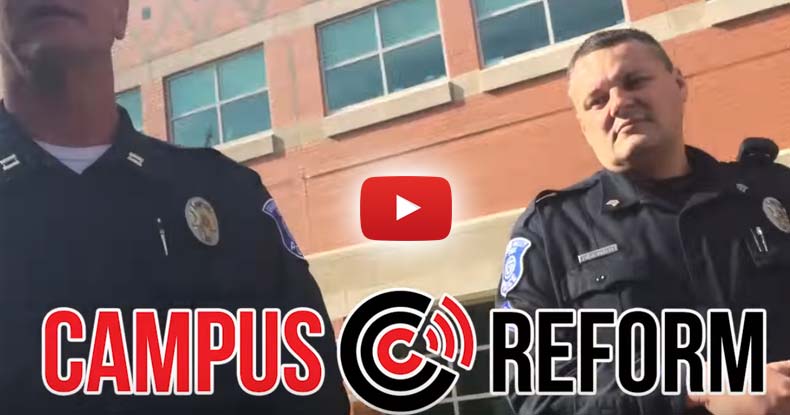 Allendale, MI — Students at Grand Valley State University in Allendale, Michigan got a hefty dose of the police state this week as they were threatened with being kidnapped and caged for handing out copies of the US constitution.

The students were from the newly-formed Turning Point USA chapter at GVSU, a group whose stated mission is educating students about the importance of fiscal responsibility, free markets, and limited government.

When they were confronted by police, the group was not attempting to promote a political candidate, nor were they passing out anything controversial. They were merely handing out copies of the constitution.

Not one, but two campus cops approached the group and told them that they immediately needed to stop handing out the pocket constitutions because it violated the school’s policy.

“In order to do that, you gotta be approved by the office of student life,” one officer told them, asserting that the policy applies to any distribution of materials, even if one is not selling anything or asking for money, as reported by Campus Reform.

When the group inquired as to what would happen to them if they refused to stop handing out the document these officers swore an oath to uphold, the officers initially told them that they would be referred to the Office of Student Life while the non-students with the group would be asked to leave.

However, police quickly changed their tone and stated, “If you continue to stay here, then we’ll need to arrest you” for trespassing.

“I’m a firm believer in the First Amendment,” the officer said in a blatant act of doublespeak.

According to Campus Reform, Nathan Berning, a Michigan field representative from the Leadership Institute who was advising the students over the phone during the altercation, told Campus Reform that he finds it “unacceptable” that a person “can’t hand out Constitutions to college students” in a country that enshrines free speech in its founding document.

Instead of trying to combat the utter failure in logic by the campus cops, the students decided to concede under duress to avoid being kidnapped and caged for their free speech.

In a statement to campus reform, Mary Lyon, GVSU’s associate vice president for university communications, made sure to stay on the same doublespeak terms as the police when she implied that violating the students’ first amendment rights was not a violation of their first amendment rights:

“The university requires that groups wanting to organize, protest, or hand out materials register with the Office of Student Life and secure a room, or if a room is not available, a space set aside for such activities,” she explained. “This is not to regulate content, but rather time, manner, and place so that the educational mission is not disrupted. In this particular case, in addition to not registering with the Office of Student Life after being instructed of the procedure, the group also used a megaphone causing a disruption and a complaint to the university police department.”

Discouragingly enough, this incident is hardly an isolated one. Just last week, according to Campus Reform, an activist was forced to leave another campus, Middlesex County College, because he did not get prior approval to practice free speech.

Also, the Free Thought Project reported on an eerily similar case last year out of Glen Ellyn, IL. In that infuriating video, two students at the College of DuPage, a public university, were on campus exercising their First Amendment rights by passing out pocket Constitutions and fliers that read “America is a free speech zone,” when approached by a police officer and threatened with arrest.

Filmed ironically only one day after “Constitution Day,” the footage showed the officer infringe on the students’ right to freely express their political opinions by threatening to kidnap and throw them in a cage, claiming they are “soliciting.”

The officer tells the students that they need to get a permit and that they can’t “just do it whenever you want.”

“You can’t do it out here, otherwise I’m going to have to lock you up,” the officer told the men.

Engaging the cop, one of the men asks, “What are the rules for doing this kind of stuff on campus?”

“You go to the Student Life office, and they give you a permit to do so,” the officer replied.

The obvious absurdity of having to get a permit to exercise your First Amendment rights speaks to the administrative decimation of liberty.

Creating administrative rules, which impede American’s free speech rights, by limiting a student’s ability to freely express their thoughts and ideas on campus, seems patently offensive to the idea of freedom.

Don’t be fooled by this attempt to usurp your constitutional rights with administrative rules. Make no mistake; campus free speech zones violate students constitutional liberties. If you run into this problem on your campus contact and need help contact TheFire.org.