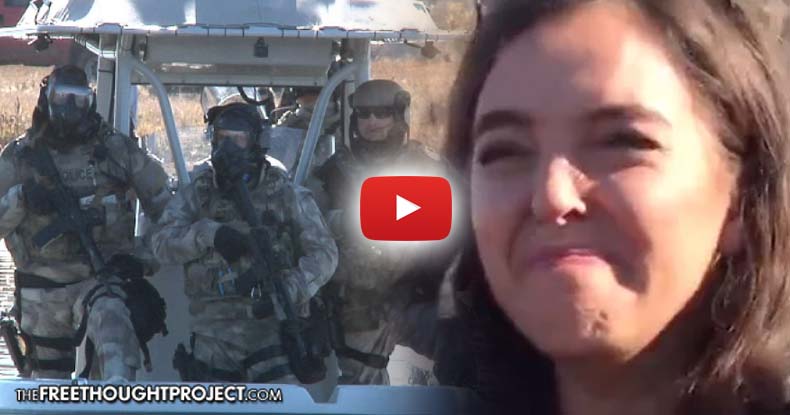 Standing Rock, ND — A humanitarian crisis is unfolding inside the United States as thousands of Native Americans, indigenous people from around the world, and advocates from every walk of life camp in North Dakota in support of Standing Rock Sioux Tribe water protectors opposing construction of the Dakota Access Pipeline. We’ve seen people locked in dog cages, pepper sprayed, beaten, and now, a journalist has been shot by police while conducting an interview. The entire event was captured on her own camera.

As Fusion reports, Erin Schrode, an activist and journalist, was doing an interview at the edge of the Cantapeta Creek when police shot her with a rubber bullet. In her video of the incident, Schrode can be heard screaming, “Ow!” before crumbling to the ground.

I was shot by militarized police WHILE interviewing a man on camera at #StandingRock…and here's the footage. #NoDAPL https://t.co/FfWiSCbiKf pic.twitter.com/4DRwNPkfZ9

In a post on Facebook, Schrode described the incident, noting that police shot her at point blank range. In spite of being a non-lethal round, there have been documented incidents of police killing people with rubber bullets from such a close range.

I was just shot. Militarized police fired at me from point blank range with a rubber bullet on the front lines of Standing Rock.

My body will be okay, but I am hurting, I am incensed, I am weeping, I am scared. Peaceful, prayerful, unarmed, nonviolent people on one side of a river; militarized police with armed vehicles and assault weapons occupying treaty land on the other, where sacred burial grounds have already been destroyed. What is happening here in North Dakota is like nothing I have ever seen in my life, anywhere in the world. This is a fight to protect and defend the water for 17 million people in the watershed downstream to the Gulf, for a livable planet, for Native and human rights, for the lifeforce of us all. We are at the confluence of the movements for civil rights, for the environment, for peace, for justice. I am proud to stand in solidarity with our Native brothers and sisters – alongside the water protectors and land defenders – who put their lives on the line and are facing excessive force, pepperspray and mace, historic trauma, brutal arrest, imprisonment in dog kennels, felony charges, and callous destruction of sacred objects. This is not about me, but I am here – and will remain here – to cover and amplify truth and bravery on the ground with my colleagues Josh Fox of Josh Fox Film, Josue Rivas of Josué Rivas Fotographer, Jordan Chariton of The Young Turks, Evan Simon of ABC News. Standing Rock represents the exploitation of a long-oppressed people, illegal land seizure, crude oil transport, media censorship, national security threat, public health crises, and more human rights violations than I can count.

It is inexcusable for the President Obama to say he will “let it play out for several more weeks.” It is unjustifiable for the Attorney General to not be here. It is unconscionable for mainstream media to not cover this. It is indefensible for all politicians to not condemn what is occurring here. It is disgraceful for more people to not speak out and show up to stop the Dakota Access Pipeline.

Pray for the water protectors, for justice, for our people and our world. #NoDAPL #StandWithStandingRock #WaterIsLife

These men shot me at #StandingRock today. I pray for them– and for our peaceful, prayerful water protectors. #NoDAPL https://t.co/hUXigAF6u4 pic.twitter.com/5HI14dTEO8

In an interview with Fusion, Schrode noted that she didn’t realize the incident was captured on her own video. While she was met with a ton of support after her original post on Wednesday, some people began to accuse her of making up the story. So, she tweeted out the video on Thursday.

“I can’t believe what is happening here in Standing Rock,” Schrode said. “It’s a scene like I’ve never seen anywhere else in the world, and it’s right here at home.”

“Who am I to say I’m in pain? Who am I to have a pity party around me when literally people are up there putting their lives on the line every day, when the land is being desecrated?”

This incident unfolded on Wednesday as police forcibly attacked protesters. As the free Thought Project reported, law enforcement responded violently to water protectors attempting to build a wooden footbridge across a creek linking a Native encampment and the Dakota Access Pipeline construction area for a prayer ceremony. The police responded with a vicious assault on the peaceful water protectors.

Slated to run under the Missouri River, the pipeline poses a direct threat to the drinking water supply of the Standing Rock Reservation and at least 18 million people downstream, particularly given Energy Transfer Partners (ETP) — the company in charge of construction — has a horrendous safety record marked by thousands of leaks and spills in the last six years, alone.

Despite remaining peaceful on the whole, the protectors of the water have been met with needless escalation and indiscriminate violence by taxpayer-funded, heavily militarized law enforcement protectors of Big Oil and Wall Street — whose vested interests in exporting North Dakota’s sweet, light crude apparently trump human rights and basic decency.