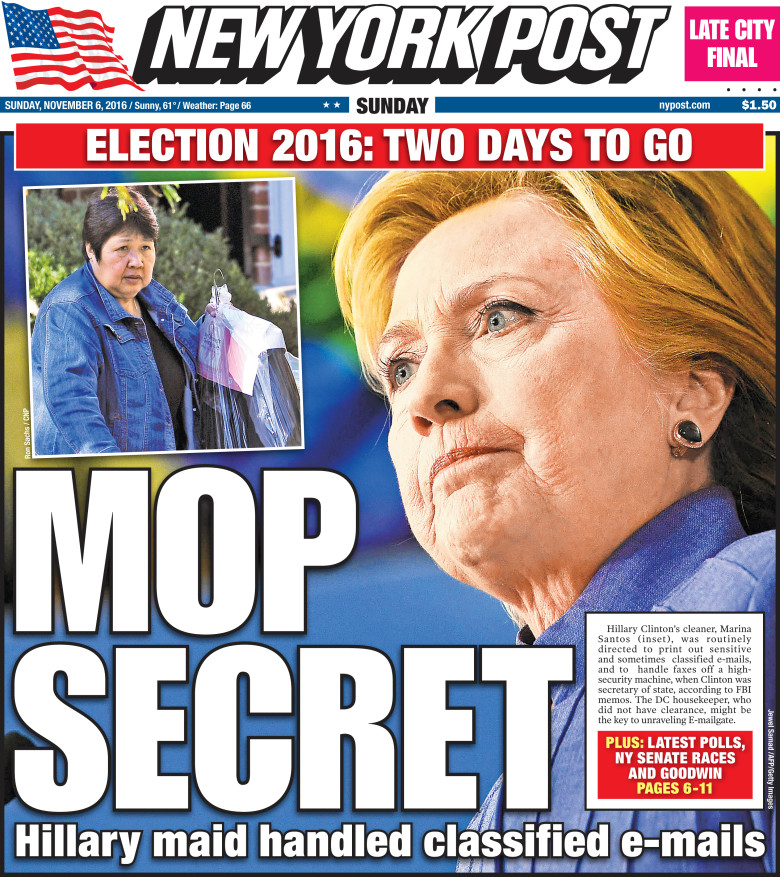 Clinton’s personal maid had access to, and was asked to print, classified emails. Things are now getting more bizarre by the hour.

A few hours ago I printed a short blurb with a WikiLeaks email exchange between Human Abedin and Hillary Clinton. The exchange talked about a mutual acquaintance named “Marina” and my presumption was that this could have been the now infamous “spirit cooker” Marina Abramovic. Though my initial speculation could still be correct, a more likely suspect may be Hillary’s personal maid — Marina Santos.

As secretary of state, Hillary Clinton routinely asked her maid to print out sensitive government e-mails and documents — including ones containing classified information — from her house in Washington, DC, e-mails and FBI memos show. But the housekeeper lacked the security clearance to handle such material.

In fact, Marina Santos was called on so frequently to receive e-mails that she may hold the secrets to E-mailgate — if only the FBI and Congress would subpoena her and the equipment she used.

Clinton entrusted far more than the care of her DC residence, known as Whitehaven, to Santos. She expected the Filipino immigrant to handle state secrets, further opening the Democratic presidential nominee to criticism that she played fast and loose with national security.

BizPac Review is also on this developing story:

Hillary Clinton had her Filipino immigrant maid handle and print classified emails for her when she was secretary of state, according to latest reports based on FBI notes.

The maid, Marina Santos, not surprisingly did not have the security clearance to handle such materials but that didn’t stop Clinton from having her top aides at the State Department forward the sensitive documents to her for printing, emails and FBI memos show, according to the New York Post.

Clinton had Santos print out talking points before speaking to another head of state, drafts of her speeches and, most disturbingly, confidential memos, among other things, the Post reported.

“Pls ask Marina to print for me in am,” Clinton told Huma Abedin in a 2011 email marked sensitive but not classified.