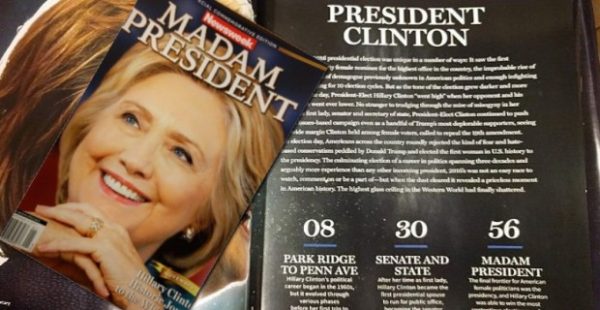 Alleged images of magazine cause fury amongst Trump supporters

Has Newsweek already printed a special “Madam President” issue that is being shipped out even before Americans vote in the presidential election tomorrow?

That’s the question raging amongst Trump supporters, who have been circulating images of the magazine online.

One of the images shows a “special commemorative edition” of Newsweek with Clinton on the cover behind the words “Madam President – Hillary Clinton’s Historic Journey to the White House.”

A highly partisan blurb on a separate page talks about how Hillary defeated “fear and hate-based conservative peddled by Donald Trump” to triumph and ensure that “the highest glass ceiling in the western world had finally shattered.”

Trump supporters reacted to the images with a mixture of anger and disbelief.

“The fix is in: Newsweek already has an issue in print, boxed and ready to ship, declaring Hillary Clinton the winner,” reported DC Clothesline.

“If it is real, why hasn’t Newsweek prepared a parallel Trump cover? Because, as we all know, this election is rigged and the mainstream media, which may not even include Newsweak, picked sides long ago,” commented True Pundit.

“This is absolute bullshit,” remarked one user on The Donald Reddit. “It is now going to be a race to see who will announce a Democrat victory first, before the outcome of the election is actually known – just like Bush/Gore.”

Others thought the whole thing was a hoax.

“This is a psyop.. Dont bite.. The text actually says “deplorable” in it. Really Would they do that? This is just to piss you off so you waste your energy,” said one.

“This cannot be real. The language in that blurb is absurdly partisan. Have a hard time imagining even the MSM writing that copy,” added another.

Newsweek has been asked repeatedly whether the magazine is real but has failed to respond so far. If the issue is fake, it’s very convincing.

Newsweek went digital only in 2012, but has been releasing special commemorative editions since that date, including one about Prince after his death in April.

One thing we know for certain is that Newsweek will not be publishing a “special commemorative edition” of its magazine that is favorable to Donald Trump if he wins.