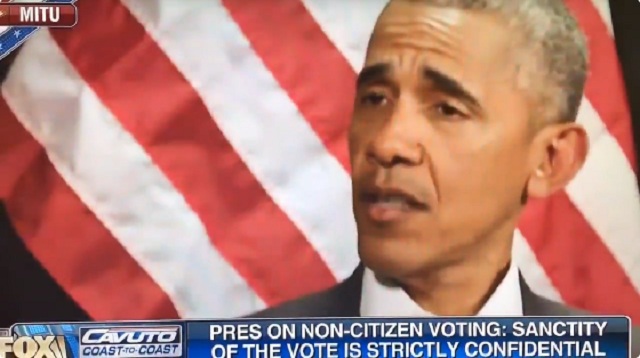 Barack Obama, a sitting President of the U.S. of A., not only tells a bald-faced lie — that “undocumented immigrants,” i.e., illegal aliens, are U.S. citizens — he actively encourages illegals to vote, with impunity.

What a slap in the face of countless people across the world who actually respect this country’s laws by applying to immigrate to the United States.

Here’s the video, followed by my transcript:

Woman who identifies herself as a Millenial “Dreamer,” i.e., she illegally came into the U.S. when she was a minor (defined as younger than 16 years old): “The Millenial Dreamers, undocumented citizens — and I call them citizens because they contribute to this country — are fearful of voting. So if I vote, will Immigration know where I live, will they come for my family and deport us?”

Obama: “Not true, and the reason is, first of all, when you vote, you are a citizen yourself, and there is not a situation when the voting rolls somehow are transferred over and people start investigating. The sanctity of the vote is strictly confidential.”

Words no longer have meaning: “Undocumented citizens” is a new Orwellian oxymoron.

Recall that Obama had studied Constitutional law at Harvard Law School. His course of study must have been How to Subvert the U.S. Constitution.

Why isn’t Congress impeaching this outlaw and disgrace to the presidency?