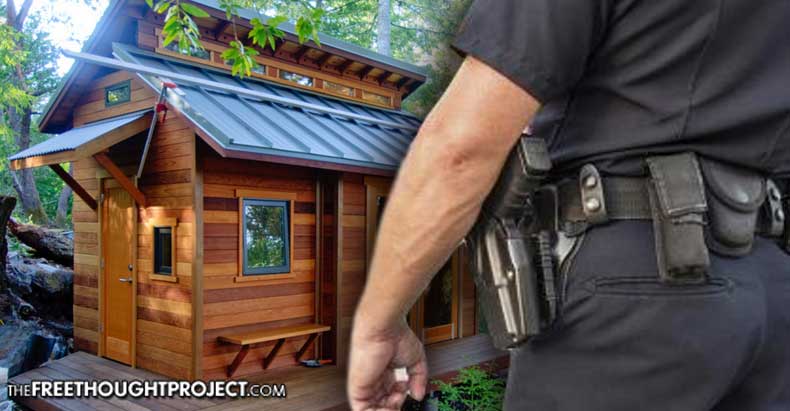 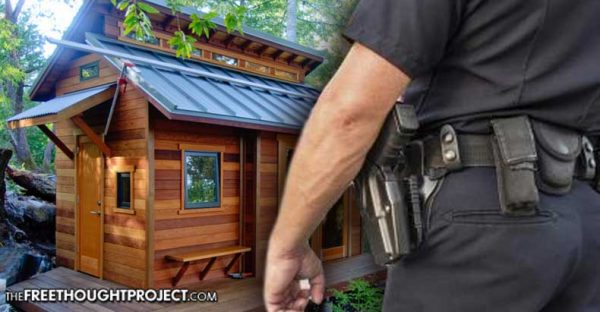 As the corporatocracy tightens its grip on the masses – finding ever more ways to funnel wealth to the top – humanity responds in a number of ways, including the rising popularity of tiny houses.

These dwellings, typically defined as less than 500 square feet, are a way for people to break free of mortgages, taxes, utility bills and the general trappings of “stuff.” They’re especially attractive to millennials and retirees, or those seeking to live off-grid.

But government and corporations depend on rampant consumerism and people being connected to the grid.

Seeking actual freedom through minimalist living should seem like a natural fit for the American dream, but the reality is that many governments around the country either ban tiny homes or force them to be connected to the utility grid.

“As of now, few cities allow stand-alone tiny houses. Most communities have minimum square footage requirements for single-family homes mandating that smaller dwellings be an “accessory” to a larger, traditional house. Many also have rules requiring that dwellings be hooked up to utilities, which is a problem for tiny-house enthusiasts who want to live off the grid by using alternative energy sources such as solar panels and rainwater catchment systems.”

Some of the more recent examples of explicit bans include Etowah, TN and Wasilla, AK, which don’t allow homes less than 600 square feet and 700 square feet, respectively.

Lawmakers spout slippery slope fallacies, saying that allowing tiny homes will lead to decay and “unsightly little cabins plunked down next to traditional homes.” Using government force to stamp out societal change in response to financial factors is this councilman’s idea of conservatism.

Granted, some cities are actually encouraging tiny homes as a means of freedom or as a solution to homelessness, as in Detroit, MI. Some Los Angeles lawmakers don’t see it that way, calling tiny homes for the homeless “a threat in many ways to our public safety.”

Wasilla residents are baffled by the tiny home ban, which seems to run contrary to Alaska’s wild and free nature. Tundra Tiny Houses is leading a new market of small home construction using renewable energy, and now they’ll have to tell customers Wasilla is not an option, in addition to Anchorage to Eagle River.

A big priority for tiny home dwellers is their reduced environmental impact. Many are capable of producing all their own energy from solar and wind, collecting rainwater and reusing graywater. Not depending on utility inputs naturally makes a lot of sense, especially for a tiny home on wheels.

Even those who put their tiny home on a piece of land away from crowded spaces – with the intention of living off-grid through renewable inputs – are considered outlaws if they don’t hook to the utility grid.

This of course ensures that utility companies, which are big donors to political campaigns and profit immensely from government-enabled monopolies, will always get their cut from every household.

In January we reported that sunny Nevada essentially killed its solar industry by increasing their tax on solar customers by 40 percent, causing solar providers to leave the state. The only beneficiary was NV Energy, whose energy monopoly was protected.

Spur, TX was the first city to advertise being “tiny house friendly” as a “town that welcomes new pioneers” – proudly supporting “reducing costs and gaining freedom to operate according to your own plan, unfettered by onerous and unnecessary costs.”

To have this “freedom,” you must secure your properly permitted tiny home to an approved foundation and be connected to city utilities. The property must always be mowed and the prime responsibility is “of course, paying your taxes!”

“When cities require the same permitting for tiny houses on foundations as they do for traditional houses, it often doesn’t make financial sense to build tiny. “At that point it’s really more of a lifestyle choice than an economic choice,” said Nick Krautter, a real estate agent in Portland, Oregon, who abandoned plans for a tiny house development.”

23-year-old college graduate, Sarah Hastings, built a 190-square-foot home on three acres of farmland in Hadley, MA, complete with a garden next to it. But the town found she was not in compliance with zoning ordinances, and now her home is in storage.

Hastings proposed a change to the town’s laws to allow for her tiny home, but the measure was vote down “because some residents were afraid the town would be overrun with them.” There will be no minimalist, environmentally friendly living in Hadley.

Clearly, the emergence of tiny homes is being met with fear, and the resulting banishment of freedom, by too many towns and cities across America that can’t quite fathom this shift in the way people think about living.

It’s one thing to be concerned about safety issues, but the imposition of minimum square footage requirements and mandatory connections to city utilities is mindless authoritarianism.

Let’s hope places like Fresno, CA and Rockledge, FL, which are specifically allowing tiny homes on wheels, can help their more “traditional” counterparts embrace the future.