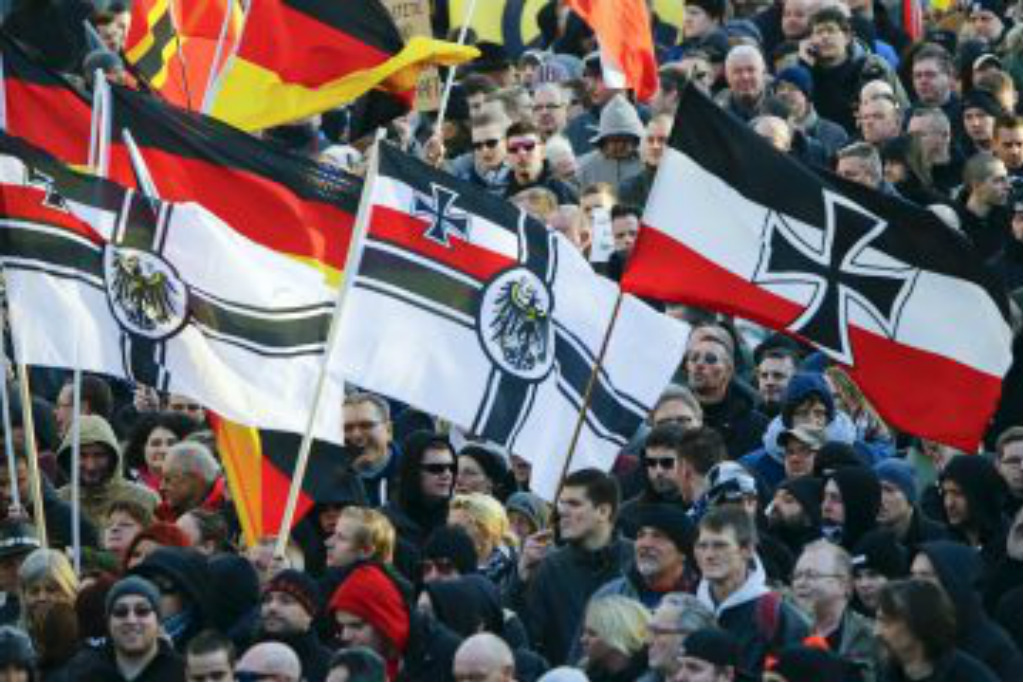 The rebellion is growing across Germany as the German people are sick and tired of being mistreated by Muslims and are rising up against them, such as in one story where a mob of German people got together and hunted them down, throwing rocks at them and driving them out of town:

Dozens of suspected far-right extremists have rampaged through the eastern German town of Bautzen, “hunting” refugees, according to local media. Police denied the incident, but have been accused of a cover-up and inaction.

A mob of up to 50 stone-throwing locals reportedly chased migrants from Bautzen town center on Tuesday night, the second such incident in two weeks, according to Die Zeit.

The far-right activists took to cars and bikes to ‘hunt’ migrants down. Most of them were wearing dark clothing with German Imperial flags and right-wing-badges, while some of their cars had slogans such as “White Power” written on them, according to a Sueddeutsche Zeitung report.

A small police team was present at the time of the incident but apparently did not interfere until the refugees began to run from the mob, who had gathered at the town’s market square, the newspaper reported.

One migrant was subsequently hit by a bicycle ridden by one of the suspected far-right group, and later suffered a cut from a stone which hit him. Officers also rescued a second migrant and escorted him away in their vehicle.

A police spokesperson, however, told Die Zeit that “nothing special” had happened in Bautzen on that day, later saying in a statement that no “hunt” for refugees had taken place. (source)

It is great to see the German people finally rising up and fighting against Islam and the Muslims against the cultural marxists that have taken over Europe.

And on a final point…did you catch the little details?:

The far-right activists took to cars and bikes to ‘hunt’ migrants down. Most of them were wearing dark clothing with German Imperial flags and right-wing-badges, while some of their cars had slogans such as “White Power” written on them, according to a Sueddeutsche Zeitung report.

…and then I said:

It is great to see the German people finally rising up and fighting against Islam and the Muslims against the cultural marxists that have taken over Europe.

It is good to see people standing up against the Muslim invasion of Europe. But as we were the first website online to point out, the popular movement against Islam is being influenced by people at its highest levels who want to introduce National Socialism as an answer to the Muslim issues.

As we have been saying, the Muslims were allowed to invade and be given license in order that the same people who allowed the invasion would be replaced by a different group but of the same mindset who would introduce National Socialism in its place. National Socialism, as we have pointed out, is the political application of what are varying forms of anti-Christian neo-paganism that manifests itself in the form of a lust for power and control that always result in a massacre. It is why Germany attempted to destroy the slavic people during the Second World War- because as a part of their revived pagan beliefs under Himmler, which he called “Wotanism,” the slavs were an inferior race and needed to be destroyed.

Notice how I also used the phrase “cultural marxism“. This is a phrase used by National Socialists to promote themselves as opposed to the “left”. This is all a word game, for Marxism is Communism is Socialism in their fundamental teachings. All of them hate God and Christianity. The only difference is that one group says his version is better. It is like arguing over if Coke, Pepsi, or Sprite is healthier- they all have the same ratio of water and fake sweeteners, just with a little different flavor to distinguish them.

Yes, this is a real meme and one of many like it. It has been tried. Just ask the Slavic people.

The “devil is always in the details,” appearing as an angel of light bringing a majority of truth with just a little bit of lies intermixed, and yet it is these lies which poison the entire work. You only need a few drops of poison to ruin the whole pitcher of Kool-Aid.

That is why I put this story up and wrote it the way I did (notice too the picture of the German Kaiser flags and how I started the article too), because with the current cultural climate, it is too easy to inadvertently support one evil in place of another, and the end result is still evil promoting evil. Jesus said that devils cannot cast out devils, so how is there any difference in supporting one evil (the Muslim evil) over another (the National Socialist evil)? There is none.

Don’t drink the Kool-Aid when reading about articles that praise National Socialism, for all that would be is to replace one barbarian with another, when in the they end both the Muslim and the National Socialist are all on the same team just like the political, financial, and business people who created the Muslim crisis.