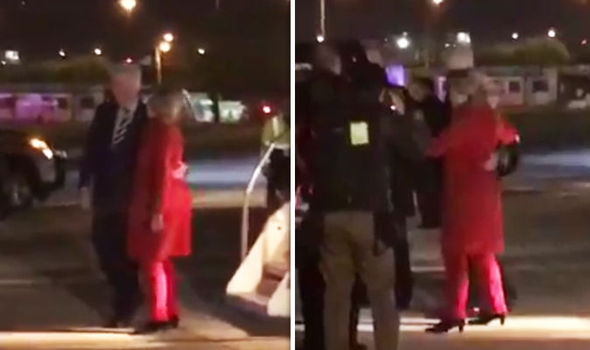 The only thing scarier than what we know about Hillary, is what we don’t know.

NEW FOOTAGE HAS SPARKED A DEBATE ON THE HEALTH OF HILLARY CLINTON – JUST HOURS BEFORE THE US TAKES TO THE POLLS TO DECIDE ITS NEXT PRESIDENT.
THE VIDEO APPEARS TO SHOW HILLARY CLINTON STUMBLING AS SHE REACHES THE BOTTOM OF THE PLANE STEPS IN PHILADELPHIA.

The 69-year-old is then bundled into the vehicle by her husband Bill and whisked away to the next rally.

Hillary has been campaigning in key battleground states as the US Presidential election enters the final few hours.

The latest footage, tweeted by Bloomberg, has sparked a huge debate about the health of the former First Lady.

Not My Bro tweeted: “She looks sick and disoriented. She should go to hospital and get her medical issues corrected.”

Ron Coulter said: “Is she having another health crisis. Timing is everything!”

Others believe the New Yorker is concealing a drink problem.