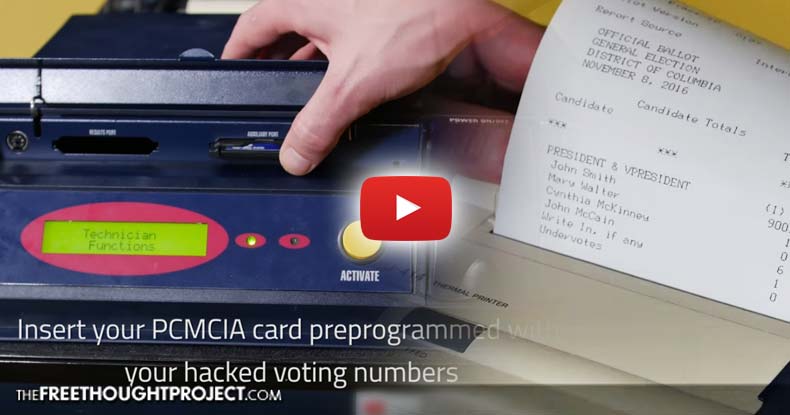 One thing in US history is consistent throughout every single election cycle — allegations of voter fraud. These allegations, however, are not the ramblings of a kook with tinfoil wrapped around his head, they are substantiated and reach as high as the Supreme Court. Don’t believe it? Ask Al Gore and George W. Bush. You can also ask the researchers over at Cylance, Inc., who just put out a short video showing how anyone can hack a voting machine with a $30 piece of hardware.

If you think that the ruling class would leave it up to the voters to decide who gets elected, you should think again. Every single candidate who actually challenges the status quo becomes a target.

This year is one of the worst years ever for voter fraud, as it’s been captured on video — multiple times.

In February, Hillary Clinton declared herself the winner of the Democratic Party in the much-anticipated Iowa caucuses. Immediately after the ‘victory,’ Clinton went on CNN to bask in her counterfeit fame.

“I am so thrilled,” Clinton told Wolf Blitzer in an interview Tuesday afternoon. “My luck was not that good last time around, and it was wonderful to win the caucus, to have that experience.”

However, fraud was so rampant that a C-SPAN video caught it. Clinton’s ‘victory’ would have nothing to do with ‘luck,’ and her premature declaration of the “razor thin” tie, was no mistake.

When campaign minions aren’t fudging the physical vote count, computers, tasked with tallying the vote, are susceptible to hacking.

In 2006, the documentary Hacking Democracy, exposed Diebold and their role in rigging elections with their electronic voting machines.

Now, a group of researchers at Cylance, Inc., a next-generation cybersecurity company, has made a damning video showing how to compromise a Sequoia AVC Edge Mk1 voting machine.

According to the researchers,

The video shows how easy it is for a third party to remove and replace internal flash memory cards, directly manipulate the voting tallies in memory, and cause a vote for one candidate to be credited to another by altering elements of the device’s display.

Additionally, the video demonstrates how vote tallies can be manipulated on both the Public Counter and the Protective Counter, which was designed to act as a redundant verification system to ensure results are valid.

While similar methods of exploit have been proposed on a theoretical basis by other researchers, Cylance is the first to successfully demonstrate an exploit for the vulnerabilities in a real-world scenario.

Like true professionals, Cylance also provides a short-term solution to mitigating these risks in the 2016 election:

• Increased supervision/ monitoring of physical access to electronic voting machines, especially as it pertains to any interfaces or ports except for the Voter Activation Card slot (typically found on the front)

• Frequent verification of hardware or software errors, such as those displayed on operator screens (e.g.: the LCD on the back of a Sequoia voting machine)

• Monitoring and verification of tamper-proof and/or tamper-evident seals (typically used to prevent or at least indicate tampering) surrounding the devices, ports, latches, etc.

In the long-term, Cylance recommends phasing out and replacing deprecated, insecure machines – namely those without robust, hardware-based firmware and data verification mechanisms is recommended. Also, additional due diligence of polling place volunteers, workers, and officers may help mitigate possible collusion for tampering by these groups.

Like Hacking Democracy anc Cyclance, exposing election fraud is is nothing new. Clinton Eugene “Clint” Curtis is an American attorney, computer programmer and ex-employee of NASA and ExxonMobil, who also exposed election hacking.

He is notable chiefly for making a series of whistleblower allegations about his former employer and about Republican Congressman Tom Feeney, including an allegation that in 2000, Feeney and Yang Enterprises requested Curtis’s assistance in a scheme to steal votes by inserting fraudulent code into touch screen voting systems.