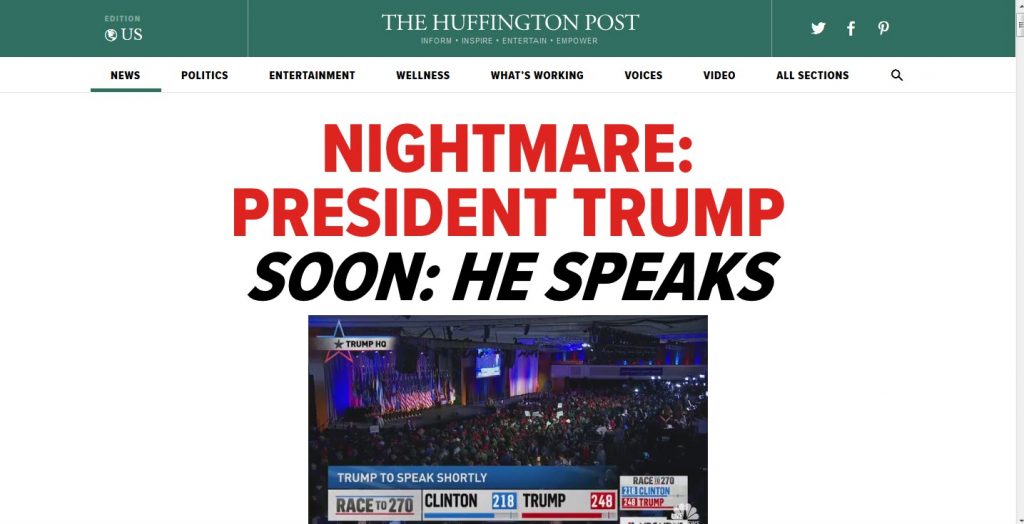 One of the funniest parts of watching the 2016 election night coverage was to see liberal propaganda parade Huffington Post lose it along with their rejected, loser candidate Hillary.

For a long time, HuffPo’s live coverage of the tally referred to election night as “fright night,” after it began to look like Trump would take Florida. Then once he won, HuffPo switched it to “NIGHTMARE: PRESIDENT TRUMP” in red caps.

After accepting reality enough to pen an article, they came out with, “America Has Done What Seemed Unthinkable. Donald Trump Is The Next President.”

It’s filled with all kinds of dramatic scaremongering and starts with this:

There are no adjectives to describe what happened on Tuesday night, at least none that seem appropriate for an election result as unfathomable as what transpired.

American voters were presented with a choice: Hillary Clinton, a candidate with a lengthy record of governance and a history-making story arc, but who also was distrusted and disliked, predominantly for her handling of email; and Donald Trump, who defied every norm in politics, was openly misogynistic and contemptuous of minority groups, played to the worst of our social instincts, and spoke cavalierly of nuclear war.

We chose to jump into the abyss. Barring the unexpected, we elected Trump. Although it’s unclear if he will win the popular vote, he appeared comfortably on the path to an Electoral College victory by early Wednesday morning.

What happens now is anyone’s guess. These waters are uncharted. But if campaign past is governing prologue, there are remarkable, existential changes in store for the country.

It’s kind of hilarious to watch Huffington Post wallow like out-of-work soap opera actresses in their own defeat over there.

Because what Trump’s election proves is that America would much rather jump into the abyss of the unknown with Donald Trump than continue to wade in the sewage with murderous, corrupt, and crooked Hillary Clinton.