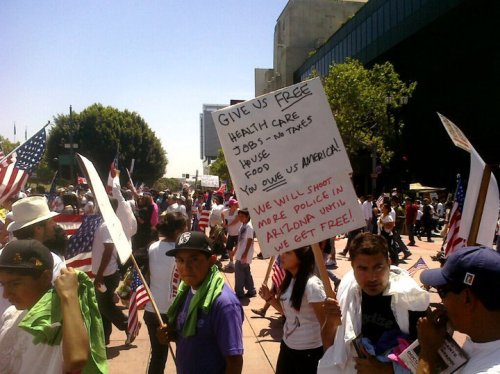 Donald Trump is demonized for his stance on illegal immigration — that the U.S. southern border with Mexico be fortified, and that illegals who are criminals should be deported.

Now an election-eve poll finds that most Hispanics in the U.S. actually agree with Trump’s stance — the enforcement of federal laws governing immigration which the Obama administration deliberately ignores.

To gauge the true sentiments of Americans on illegal immigration, the poll eschewed “hot” emotion-laden terms such as “deportation” and “amnesty”, and used “neutral language” like “returning” instead of “deporting”.

Paul Bedard reports for the Washington Examiner, Nov. 8, 2016, that a poll conducted by Pulse Opinion Research for the Center for Immigration Studies (CIS) found that:

“Unlike many other polls, which give the public the false choice of mass deportation or a ‘path to citizenship, this poll asked respondents if they support causing illegal immigrants to leave the country by enforcing the law. A majority of the public supported this approach; and a majority or plurality supported it among almost all demographic groups, including Hispanics. Moreover, a majority of Americans want a level of legal immigration significantly lower than the current level; few want the kinds of increases contained in the Gang of Eight bill from 2013.”