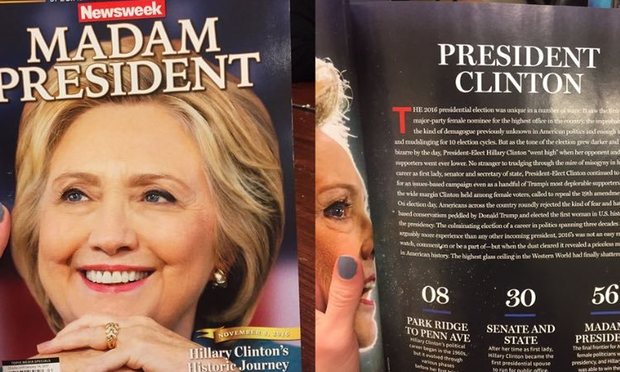 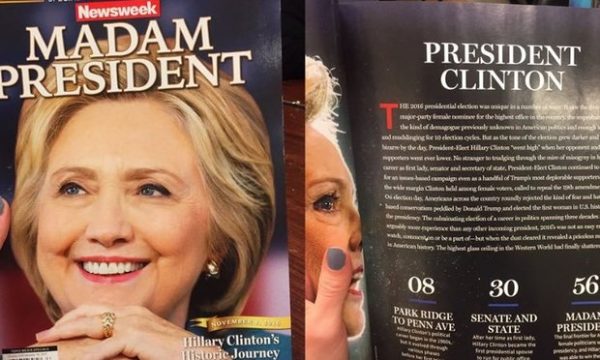 Over the weekend Dr. Eowyn reported that Newsweek had pre-printed the Madam President Hillary Clinton edition, having it boxed and ready to ship.

The story just got better.

It seems that 125,000 copies were actually shipped to newsstands.

Furthermore, to add insult to injury, Newsweek is not even taking credit for their obvious mistake, electing to pass the buck to their partners at Topix Media.

Alice Salles is reporting for AntiMedia:

Assuming Democratic candidate Hillary Clinton was going to be elected on Tuesday, Newsweek’s partner and producer of special issues, Topix Media, rushed the publication of the edition. After the mistake was caught by other news organizations like the New York Post, Topix CEO Tony Romando apologized. “Like everybody else,” Romando said, “we got it wrong.”

From the Editors: 2 special edition covers for 2016 election outcomes were produced by a Newsweek licensee, Topix Media, and not by Newsweek pic.twitter.com/MwC4RytGbC

While two issues were designed and laid out in advance, one with Clinton and a second one with President-elect Donald Trump, Topix Media took action prematurely. Like many in the media and the general public, Newsweek’s partner may have gotten ahead of itself due to deceptive polling results.

Do you believe the spin put on this?

They were trying to get the jump on their competition and got it wrong.

Anyone with a shred of common sense can see that.

However, I sincerely doubt that Newsweek knew nothing about this. My bet is that they will now be paying Topix even more money, as their publishing partner, after throwing them under the bus.

This is just another one of those heart-warming post-election stories to warm the conservative soul.

Is it just me, or can you not stop laughing about this?