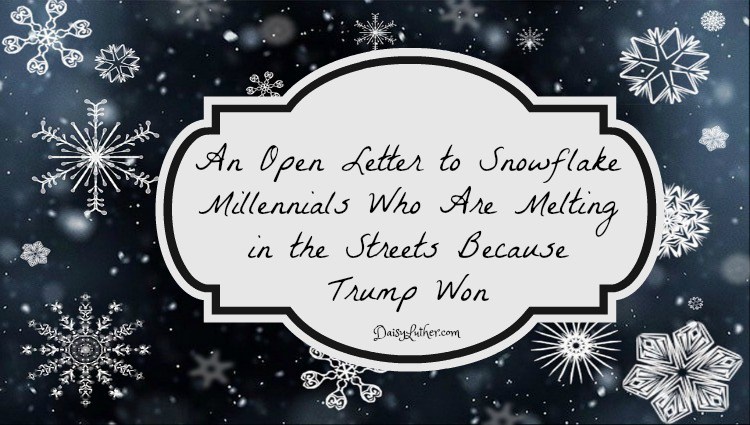 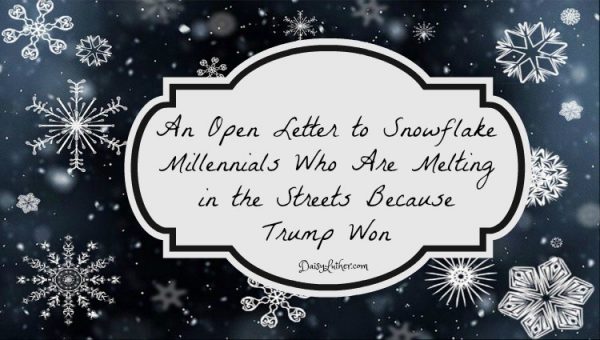 In a world full of political correctness, safe spaces, participation trophies, and social justice, a whole bunch of Millennials just got a big, painful dose of reality.

All of those kids who have expensive college degrees that didn’t train them to do anything productive just discovered that the world could and will say “no” to them.

They’re throwing the equivalent of an epic toddler temper tantrum on the floor of America. They are kicking and screaming in the streets, wailing to the heavens, and refusing to stop until they get their way.

What society should be learning now is why it’s important that children don’t get trophies just for showing up and why a good parent makes certain that there are consequences for their children’s actions.

What society is actually doing is coddling of a bunch of Marxist-educated brats in a way that will only perpetuate this type of behavior in the future.

America has effectively shut down to give these heartbroken kids time to either recover or take their angst to the streets.

At Yale University – YALE, for the love of crickets, an elite institution of education to which only the brightest and highest achieving kids can gain access – some professors made midterm exams optional. In a tweet posted by the editor of the Yale Daily News, Jon Victor posted a photo of the email sent out by Professor Steven Berry.

Also at Yale, an election “primal scream” was organized so that students could, well, scream. I couldn’t make this up.

The scream offered students a chance to come together, process the shock of the moment and use that energy to move forward, said a sophomore at the event. She added that the primal scream is in no way incitement or an invitation for reckless behavior, but rather a contained period of expression that hopefully enables its participants to express their frustration productively. (source)

In other parts of the country *cough* California *cough* students walked out of classes due to their unhappiness over the election results. Berkeley High Principal Sam Pasarow told NBC Bay Area:

What the hell, America?

It’s time for some tough love. Pay attention, little millennial Snowflakes, because this is important.

November 8th dawned bright for you. You woke up, confident that social justice would prevail and that the first woman president of the United States was going to be announced later that evening. Fueled by misinformation and fake polls from the likes of Huffington Post and CNN, the thought that Hillary Clinton might be defeated never even crossed your minds.

You went to the polls, some of you for the very first time, and cast your votes for someone sheerly based on her possession of a vagina.

Because you’ve always received a sticker just for turning in your homework, because you scorn those who think differently as uneducated hicks, and because you don’t understand the word “no,” the shock was palpable when the electoral map began to turn red.

There were tears, hugs, and whispered words of support as you watched in horror. Yes, kids, Donald Trump was elected the 45th president of the United States by the process in which presidents have been elected since the dawning of America.

Give me a freakin’ break, Snowflakes.

Where were you when Hillary Clinton and the DNC stole the primary by colluding against Bernie Sanders? Seriously, that would have been the time to protest. When you were screwed by your own party, you didn’t set things on fire and burn effigies of Hillary Clinton, who is very possibly the most corrupt politician ever to run for office. If you didn’t protest that debacle, it’s pretty hypocritical to protest now.

How do you think working class Americans felt when Obama got re-elected and we knew that he’d be demanding more than our mortgage payments each month for a crappy health care system that doesn’t even actually pay for anything unless your bills exceed $5000? I haven’t been happy with my choices at the polls for decades, but I’ve never wept, feverishly looked up the number for the suicide hotline, refused to function, or set things on fire.

Grow up. We don’t always get our way. This is reality and sometimes we don’t like it.

Here’s what you should be angry about, Snowflakes.

You should be angry about the fact that you have not been adequately prepared for life.

You should be angry about the fact that you are now paralyzed with “fear” because society has made you this way.

You should be angry about the fact that no one has ever taught you coping mechanisms.

Life is not fair. We don’t always get a sticker. Sometimes, we actually lose a game.

Losing an election is not a threat to your existence – it is how life goes for a percentage of America every four years.

The fact that there are no consequences for your current bad behavior is not helping you. It’s perpetuating your unhealthy cycle of poor coping mechanisms. It’s providing positive reinforcement.

Across America, you, the defeated liberals, so-called social justice warriors, and irate students are pouring into the streets to vent your rage.

For most students, this was their first presidential election. And for many, the response to the results was visceral.

Hundreds of shouting UCLA students poured through campus and into the streets of the surrounding community. The Daily Bruin estimated the crowd at more than 1,500 and reported that they began tearing up and burning a Trump piñata and tried to flip over a car, stopping when they realized someone was inside it.

But that is far from the worst of it.

You have shut down roadways and commerce. You have destroyed property. You have had a big ole hissy fit in front of the entire world.

You “refuse to accept” the results of the election, which is particularly rich, since you pilloried Donald Trump for refusing to say he would accept the results if they didn’t go his way.

Your current behavior is akin to laying down in the chocolate aisle of Target and refusing to move until your mom buys you a candy bar. The only difference is, on the rare occasion that one of my children behaved like that, I picked them up and carried them out of the store, leaving a fully loaded shopping cart behind.

You people need to be sent to your rooms until you can behave yourselves, not coddled and given a cookie.

And now what you started is getting completely out of hand.

Believe it or not, we have some things in common. I understand wanting to change the world and make it a better place. This is the very reason why I do what I do. But I know that my actions lead places, and I try to think this through before taking them. I reflect on the consequences.

And that’s what you missed when you drank a double shot of the Mainstream Media Koolaid and emotionally reacted to your candidate’s loss. You didn’t think about the consequences because, in your pampered life, there have never been any consequences.

Well, here’s your reality check. Your well-meaning yet misguided movement has been co-opted.

What started out as moderately peaceful demonstrations (if you call blocking traffic and screaming “F*** Trump” peaceful) have been infiltrated by paid instigators who are taking things to the next level and inciting chaos, violence, and destruction.

You are in way over your heads.

Some people are calling for all-out war against those who voted for Trump, like this woman who spoke to CNN in Los Angeles.

Just to make sure you caught that (emphasis mine):

“If we don’t fight, who is going to fight for us? People had to die for your freedom where we’re at today. We can’t just do rallies, we have to fight back, There will be casualties on both sides. There will be, because people have to die to make a change in this world.”

Is this really what you want?

Do you honestly want to kill people who voted for Trump? Do you want to overthrow the government and only allow one school of opinion to exist in America, but only if it’s yours? Do you want to live in an America that is like North Korea, where reality nothing more than a creation of the propaganda machine and differing points of view are stamped out with a jackboot?

Come one, now. You have to see how ridiculous this is.

You are now hopelessly out of your depth.

The situation you started has escalated beyond your wildest nightmares, and if you have any sense at all, now would be the time to feel fear, because, now, you truly are in danger.

Protests in Portland turned into out-and-out riots last night. While you thought you could just burn effigies, chant, and maybe sing Kumbaya, you’re now being intimidated by professional protesters.

Mike Bivins, a local freelance journalist, said the protest took a noticeable turn late Thursday as demonstrators passed a Northeast Portland car dealership, where some starting breaking car windows. A dumpster and a newsstand were set on fire.

Bivins said a Black Lives Matter organizer at Pioneer Courthouse Square told demonstrators earlier in the day not to police “anyone else’s form of protest.” (source)

Don’t delude yourselves into thinking that you’re on the same side. Their agenda is not your agenda.

It’s time to go home before someone gets hurt.

Everyone knows you’re mad, but while expressing your outrage, you’ve made a terrible mess of this.

You have cleared the path for violent, paid protesters to destroy entire neighborhoods. You sought to cause havoc because you didn’t get your way, and your havoc has been matched and exceeded. Now, family homes, monuments, and small businesses all over the country are being defaced and destroyed.

Full of people with every skin color under the sun.

Full of the women, children, gay people, and straight people that you claim to be championing.

This is the reality you’ve created with your righteous indignation. You turned neighborhoods into scenes out of Mad Max. Whether you destroyed property or not, you opened the door for this.

Go home so the adults can clean up your mess.

And think about what you’ve done.