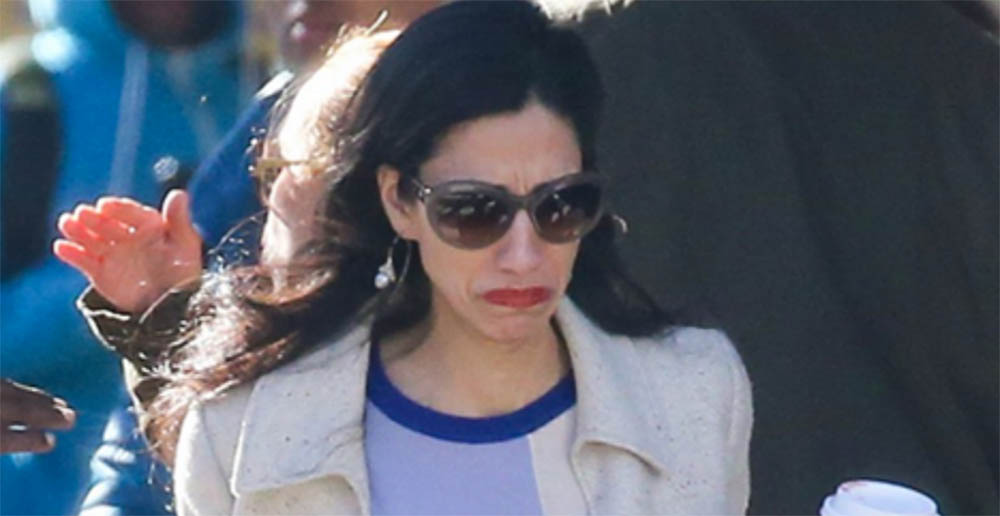 If there’s one pic that can encapsulate Hillary Clinton’s and the Demonrats’ resounding defeat on Nov. 8, 2016, it’s this:

“At one point Abedin’s lip quivered and she wiped her eyes as she took the emotional journey back to work . . . .

Abedin has many reasons to take the loss hard. She has been a constant presence at Clinton’s side, having worked in her office when she was first lady, served as ‘body woman’ accompanying her while Clinton was a senator, and having followed her to the State Department . . . .

Abedin took on more senior roles with Clinton at State and at the campaign.

In hacked emails posted on WikiLeaks, she emerges as Clinton’s ultimate gatekeeper, weighing in about top fundraisers and dignitaries seeking face-time with the former secretary of state, while also serving as a conduit of information to the Clinton Foundation.

Abedin was suddenly and unexpectedly out of the Clinton bubble after FBI Director James Comey announced just 11 days before the election that the bureau was taking another look at Clinton’s emails.

It soon was revealed that the FBI had come across thousands of additional emails related to Clinton while investigating the laptop of disgraced ex-Rep. Anthony Weiner, who is married to Abedin . . . . Weiner, who quit Congress after a sexting scandal, allegedly sent inappropriate messages to an underage girl.

But she re-emerged to hold a Washington D.C. fundraiser with Vogue editor Anna Wintour on the Friday before the election where she was photographed smiling . . . .

Abedin was back on the plane for Clinton’s final flights, which had the feel of a victory lap as singer Jon Bon Jovi hitched a ride between campaign events and Abedin laughed at the front of the plane.

It isn’t known what’s in store for the longtime Clinton aide now that her boss isn’t going to the White House . . . . Campaign employment typically ends immediately after a defeat, as campaign work to pay off vendors and close up shop.”

Before you start feeling sorry for Huma, just bear in mind that while at the State Department, Huma got special dispensation under a “special government employee” arrangement created by the State Department which allowed her to work for private clients as a consultant while also being an adviser to Secretary of State Hillary. Under this arrangement, Huma did consultant work for Teneo, a strategic consulting firm whose clients included Coca-Cola and MF Global, as well as worked as a paid consultant to the very corrupt Clinton Foundation, while continuing her role as body woman to Clinton. After Hillary left the State Department, Huma continued working for the Clinton Foundation while setting up her own private consulting firm, Zain Endeavors LLC.

At age 40, Huma Abedin has an estimated net worth of $2 million.

Not bad for someone who has only a B.A. degree in journalism from George Washington University, and who managed to reach the pinnacle of political power by riding the pantsuit-tails of Hillary, beginning when, still in college, she became a White House intern assigned to Hillary. Bill Clinton wasn’t the only one who fooled around with White House interns.

Since 2007, there are persistent rumors that Huma is Hillary’s lesbian lover. (See National Review and National Enquirer)

In an interview with People magazine, April 4, 2016, Huma described, like some love-struck teenager, meeting Hillary for the first time:

“You know these things that happen in your life that just stick? She [Hillary] walked by and she shook my hand and our eyes connected and I just remember having this moment where I thought, ‘Wow, this is amazing.’ And it just inspired me. You know, I still remember the look on her face. And it’s funny, and she would probably be so annoyed that I say this, but I remember thinking: ‘Oh my God, she’s so beautiful and she’s so little!’ ”

If Hillary had been elected POTUS, Huma, a Muslim, likely would be the White House Chief of Staff. Given Hillary’s poor health, the probability is that at some point in her first term, Hillary would become incapacitated. And given Bill Clinton’s own poor health, that would leave Huma, a Muslim, as the de facto power-wielder — a frightening thought.

While reading the Wikipedia entry on Huma, I came across this barf-inducing sentence:

“She [Huma Abedin] is a person of enormous intellect with in-depth knowledge on a number of issues—especially issues pertaining to the Middle East,” said Senator John McCain.

Why is that man still a senator?