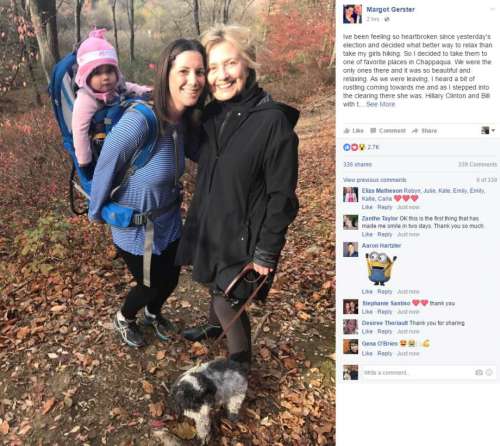 You saw the news.

It was all over the TV — on CNN, CBS, ABC, NBC, MSNBC and countless local television stations across America.

“Margot Gerster, who ran into Hillary Clinton on a hike just a day after she conceded the race, encountered a presidential nominee seemingly at peace and at grace, Gerster said Thursday.

In an image posted to Facebook, Clinton, who lives in Chappaqua, New York, can be seen smiling with White Plains resident Gerster, who was hiking with her daughter, 13-month-old Phoebe, and their dog, Piper. The photo was snapped by former President Bill Clinton, who was there as well.
It is the first time the 2016 Democratic presidential nominee has been seen outside the election bubble since she conceded the race to Donald Trump early Wednesday.
‘She seemed as well as anybody could be expected after such a crazy, crazy experience,’ Gerster recollected to CNN’s Erin Burnett on ‘OutFront’ Thursday. ‘She couldn’t have seemed any nicer or, you know, kinder and gracious to me.’
Gerster said she was trekking a path she hikes every day when she found the former first couple and immediately flashed an ‘awkward, huge grinning smile’ — or, as she put it, ‘fan-girling.’
Gerster told Clinton about how proud she was to vote for her, and how she very much wanted to hug Clinton after Election Day, which she did on Thursday.
‘She was taking a nice, peaceful hike through the woods. I don’t think she wanted to talk serious politics,’ Gerster said.
Gerster told CNN earlier on Thursday that she posted the photograph to ‘make people smile.’
‘It was a very dark day yesterday, I just feel like the fact I ran into Hillary while I was trying to clear my head, was sort of like a hopeful sign,’ she said. ‘I hope the picture brings hope to people who need it.’ “

Below is the now-famous image of Margot Gerster “running into” into Hillary Clinton while hiking in the woods of Chappaqua, which Gerster had posted to her Facebook page that is now no longer viewable to the public (more on that later):

The only problem with the story is this:

Here’s another picture that Gerster posted to her Facebook page on November 8 — of herself (right) with Hillary (left) and Margot’s sister, Alexandra (middle). (I painted the yellow arrow and the red bracket.)

As you can see in the comments about the pic, Gerster said the picture was taken some years ago, “Back in high school at a fundraiser my mom hosted at the Kittie House. She [Hillary Clinton] was the guest of honor.”

According to the people search engine Email Finder, Margot Gerster is in her early 30s, which means she has known Hillary Clinton for at least 12-15 years.

Alas, you can no longer see that pic or anything on Margot Gerster’s Facebook page because after the Alt-Media busted her story, Gerster set her Facebook page to “private”.

Gerster, who lives in White Plains, NY, said she “ran into” the Clintons while hiking in Chappaqua, NY, where the Clintons live.

Chappaqua is 11 miles to the north of White Plains.

Yeah, I totally believe that every day, Margot Gerster drives 11 miles from her home to trek in the woods of Chappaqua. /Sarc

Are all Democrats pathological liars?