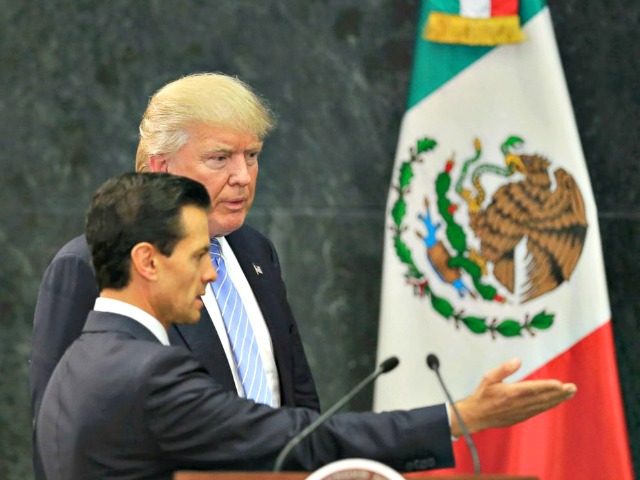 I guess Mexico isn’t as opposed to the wall as the media would have us believe.

Mexico’s President, Enrique Peña Nieto, was one of the first world leaders to reach out to President-elect Donald Trump to congratulate him on his election victory. Nieto also seems very interested on meeting with Trump to speak about a few issues involving our two countries — so interested, in fact, that he would like to begin negotiations before Trump takes office!

Donald Trump has articulated his distaste for NAFTA throughout this election season, and Canada’s Prime Minister Justin Trudeau has already commented on his willingness to renegotiate the North American Free Trade Agreement. Both of these facts have Mexico very worried about their economic prospects because while NAFTA has been of benefit to both the USA and Canada, it has been a tremendous boon for Mexico. Which is likely why Peña Nieto invited Trump to Mexico back in August, and why he has again already made overtures to the President-elect so soon after his election victory.

In a seeming effort to sweeten the deal for Mr. Trump, Peña Nieto even mentioned negotiating the building of Trump’s “wall” between our nations!

While the American markets have been surging since the announcement of Trump’s victory, the markets in Mexico have not fared well. If Trump upends NAFTA, Mexico could be in for quite a shock financially.

Mexico has huge risk in a trade war with President Donald Trump and the United States. About 90 percent of U.S.-based fortune 500 companies now have made substantial investments in Mexico. According to the U.S. Bureau of Economic Analysis’ report from 2012, U.S. multinational enterprises employed 1,106,700 people in Mexico, but Mexican companies only employ 68,800 in the United States.

America’s trading relationship with Mexico is not equal, but a number of U.S. companies and their workers do benefit from NAFTA. Mexico is America’s second-largest export market, with $236 billion, or 15.7 percent, of all U.S. exports in 2015. That is up 468 percent since NAFTA was signed in 1993.

But NAFTA has been so remarkably successful that Mexico, with $400 billion in exports, is now the 12th largest export economy in the world. That has only been possible because 80 percent of Mexico’s exports go to the United States.

It now seems clear that Donald Trump was right about having “leverage” against Mexico that would help to get his “wall” built. So, what’s next? A new NAFTA, a real “wall” on the border, or could Trump be planning for something bigger than either of those ideas?

Posted with permission from Constitution.com