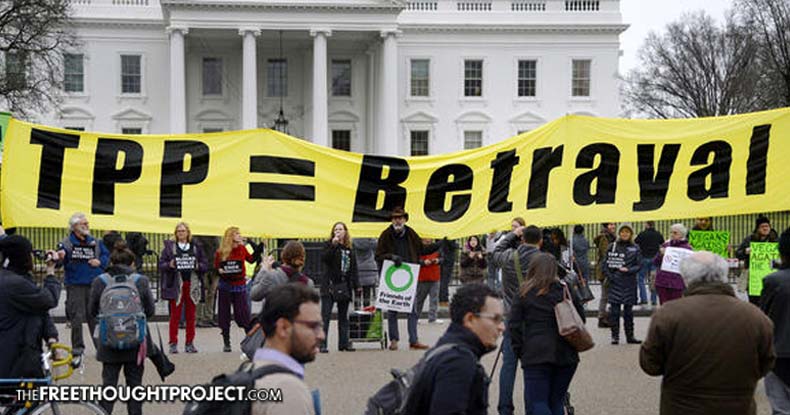 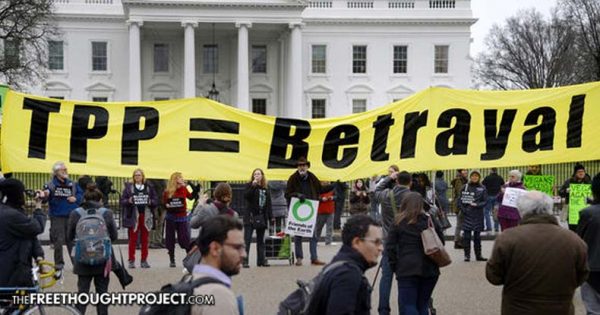 Lawmakers from both sides of the aisle announced the much-maligned, so-called ‘free trade’ deal — which would have inextricably tied the U.S. to Asia and given corporations unprecedented powers over governments — would not be pursued in the lame duck session before President-elect Donald Trump takes office.

President Obama had hoped the massive, 12-nation agreement would come to fruition under a Hillary Clinton presidency, but with her defeat and Trump’s promise to roll back the previous, similarly-modeled North American Free Trade Agreement (NAFTA), all prospects of passage melted away.

Further, the deal’s secreted negotiations and Wikileaks’ publishing of enormously controversial sections — such as the Intellectual Property chapter — left the American public leery and increasingly contemptuous of what, in essence, constituted a gigantic corporate power-grab. Aware of growing skepticism among voters, Republicans previously supporting the TPP dialed back their enthusiasm in recent months.

As the Wall Street Journal reports, “Winning a majority of votes for the TPP in the House and Senate would have required both a last-minute deal to address Republican priorities and an election result that didn’t show such broad discontent.

“Neither occurred. Since the election, Senate Majority Leader Mitch McConnell (R., Ky.) and Sen. Chuck Schumer (D., N.Y.) have said no to bringing the TPP to a vote in the lame duck session, despite the strong support of many senators in both parties for freer trade.”

Despite going out with just a fizzle, the death of the TPP is no less a victory for the people. Although it will await Trump once he takes the White House in January, it’s doubtful the new president — who may, indeed, tone down previous radical ideas to better attune to the establishment — would revive the abominated deal.

In a statement cited by the WSJ, Rep. Kevin Brady said Wednesday “this important agreement is not ready to be considered during the lame duck and will remain on hold until President Trump decides the path forward.”

Clamoring but failing to be included in the deal in the months leading up to the U.S. election, China could now continue its current path spurning American involvement in its trade and economy. In fact, as nations in the Asia-Pacific region continue to foment an alliance both amongst themselves and with Russia, further tariff-eliminating trade deals aren’t likely to include the U.S. at all.

In the upcoming Asia-Pacific Economic Cooperation (APEC) summit, Chinese President Xi Jinping will reportedly seek trade arrangements with less strictures than had been included in the TPP, such as environmental restrictions, labor protections, and tightly-constrained rules about intellectual property.

Beijing feared U.S. protectionism under the TPP would cause economic isolation in the region, but the death of the agreement — and warming alliances with its neighbors — offers a chance for China to fully assert dominance it has been building financially and militarily.

Repercussions from the presidential election echo on the opposite side of the globe as well, as negotiations for the European-focused parallel trade deal, the Transatlantic Trade and Investment Partnership (TTIP), also came to a screeching halt.

Whether or not U.S. officials will begin to switch focus from the international to the domestic in the coming administration has yet to be seen, but the predicted death of the TPP certainly portends that possibility. Trump’s sometimes vitriolic rhetoric apparently did not spark sufficient malaise for voters soured on the TPP and other proposed trade deals once he denounced the plans as special interests attempting to “rape” the country, as the WSJ noted.

As with quickly heightening tensions and utter unpredictability trailing the election of a non-politician to arguably the seat of highest power on the planet, the killing of the TPP only occurred for the odd turn of events. Its abrupt and inelegant demise — however it came about — will undoubtedly be welcome news for many.