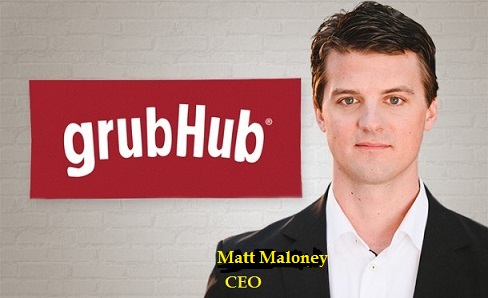 Grubhub is an online and mobile food-ordering company that connects diners with local restaurants. Based in Chicago, the company has more than 44,000 restaurant partners in over 1,000 cities across the United States and the United Kingdom. Grubhub trades on the New York Stock Exchange (NYSE) under the ticker symbol “GRUB”. The company processes more than 267,800 orders/day and has 6.97 million active diners.

Matt Maloney is the co-founder and CEO of GrubHub.

On November 9, 2016, a day after the historic election that defied all expectations in electing Donald Trump president, Maloney sent an email to GrubHub employees decrying the electoral result.

With the patronizing contempt so typical of liberal élitists, Maloney referred to Trump voters as mindless people who are “angry and scared”. He then characterized Trump as hateful, racist, bigoted, and “nationalist” (as if that’s a bad thing).

After spewing his diatribes, seemingly unaware that in so doing he displayed the very attributes he accuses of Trump and Trump voters — “angry,” “scared,” “hateful” and bigoted — Maloney then issued a truly hateful and bigoted threat to GrubHub’s 1,400 employees:

“If you do not agree with this statement then please reply to this email with your resignation because you have no place here. We do not tolerate hateful attitudes on our team.”

Blowback against Maloney’s email was instant.

By the next afternoon, a Twitter campaign to boycott GrubHub was in full force.

Chicago Tribune reports that Maloney immediately backtracked, saying his words had been “misconstrued” and that “I did not ask for anyone to resign if they voted for Trump. I would never make such a demand. To the contrary, the message of the email is that we do not tolerate discriminatory activity or hateful commentary in the workplace, and that we will stand up for our employees.” In a tweet that was later deleted, Maloney added: “To be clear, Grubhub does not tolerate hate and we are proud of all our employees – even those who voted for Trump.”

Maloney did something very interesting the day before the presidential election.

Renee Jackson reports for The Cerbat Gem Market News and Analysis that on November 7, a day before the presidential election, Maloney sold 14,491 shares of the company’s stock at a price of $37.80, for a total transaction of $547,759.80 in personal profit. Following the sale, Maloney now directly owns 1,649 shares of the company stock, valued at approximately $62,332.20.

There’s a petition you can sign, saying that “I join together with millions of other Americans to delete grubhub. We will not use Grubhub and we will encourage all of our friends and family to refuse to do the same.” To sign the “Delete Grubhub” petition, click here.