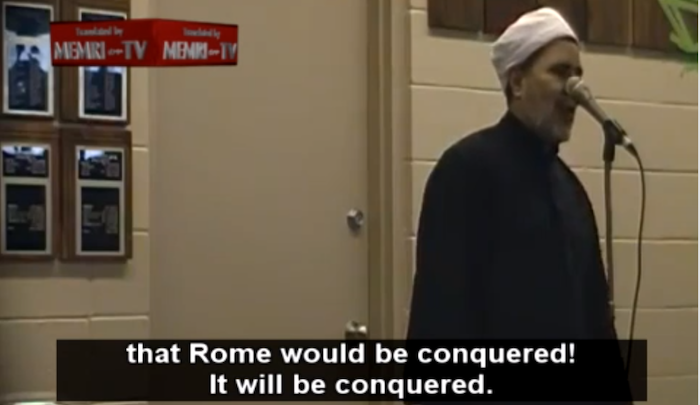 Next Friday, November 11, we will pray in Prati,” announces Bachcu area, which explains how the young Italian Muslim second generation had also planned a protest flash mob: “They wanted to go and pray Allahu Akbar throughout the city, to the Vatican, in the squares or in front of the churches, to provoke. In the end we managed to stop them, but if they start these initiatives, what do we do? “.

“We live here, we work here, we can not go to pray mica in Parioli – says Anwar, president of a prayer hall of the neighborhood -. In Italy there is a law for the mosques, then we find the premises and settle them in our own way. ”

“Here they pray up to 300 people, where we go if we close?”, We said Hussein who works in a hardware store in Torpignattara, a few meters from the Islamic center where every day is to pray. This district of the eastern suburbs, where half of the inhabitants are Muslims, is the heart of the Islamic protest against the closure of places of worship.(source)

Again, the face of true Islam shows itself. When it thinks it can take over it acts with incredible brutality and disrespect, but when it thinks it is in a losing position it immediately seeks “peace” and “tolerance.” The Catholic Church’s presence in the Vatican has always been a target for Islam, but now they have made it a priority with the Muslim invasion of Europe.

Let this be a reminder for many Americans. It has been an exciting few days with the political and bloodless (for now) revolution through the election of Donald Trump to the Presidency and a sweeping loss of the Democrat Party at the state and federal levels. A long overdue celebration has been in order. But now it is time to return to the gravity of what we face as a nation, for Donald Trump’s election did not stop time or the trials coming in the near future, but has given us a brief respite to prepare for what inevitably lies ahead.

Never forget the larger picture. The USA and Europe are still under attack from Islamic terrorists. It will take many years of work- much of it with pain- to rebuild what has been broken. Germany is still facilitating the religious, cultural, and ethnic destruction of Western Europe in the name of selling her soul to the Muslims for a chance at the dream of empire and a final confrontation with the Russians. The Chinese threat looms in the east. The Middle East is still burning as Muslim terrorists prowl the streets slaughtering Christians with joy amidst shouts of “Allahu Akbar.”

As we see here in Europe, the Muslims are still drooling like a starved animal over the prospects of destroying Christendom, and they have set their sights on the last major temporal presence of Christendom in the West and throughout the world- the Catholic Church’s presence in Rome. In their minds, if the Vatican is destroyed, the Church will also be destroyed. This beyond a mere war- this is a prophetic sign of our times that we are living through.

This is a great battle between good and evil. NO politician can save us, but only God can because ultimately He is in control. The world stands on the threshhold of a great quaking, and now is the time to work even more diligently in preparation for what is to come.

Don’t accept the “olive branch” the Muslims will try to extend here in the USA- it is really poison ivy. Their real intentions have always been the same, convert or die.