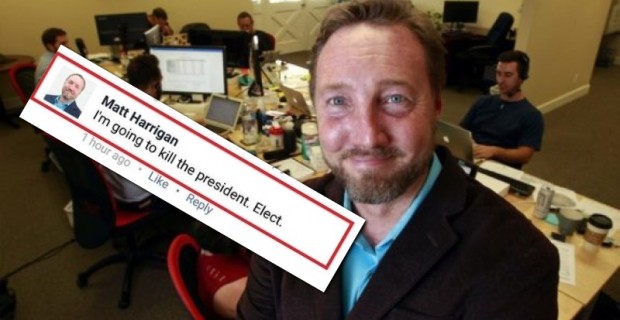 “I’m getting a sniper rifle….going to kill the president elect”

A company has placed its own CEO on leave after he threatened to assassinate Donald Trump using a sniper rifle.

Matt Harrigan is the CEO of PacketSled, a risk management company.

Harrigan caused alarm when he took to Facebook to angrily announce his plan to kill Trump after the Republican was elected president.

“Getting a sniper rifle and perching myself where it counts. Find a bedroom in the whitehouse that suits you motherfucker. I’ll find you,” he subsequently posted.

“In no uncertain terms, fuck you America. Seriously. Fuck off,” Harrigan added.

Harrigan later issued an apology on Facebook, claiming his words were a “joke,” but his colleagues at PacketSled failed to see the funny side.

“PacketSled takes recent comments made by our CEO, seriously. Once we were made aware of these comments, we immediately reported this information to the secret service and will cooperate fully with any inquiries,” the company announced on its website.

“These comments do not reflect the views or opinions of PacketSled, its employees, investors or partners. Our CEO has been placed on administrative leave.”

Social media websites have been flooded with death threats targeting Trump in the aftermath of his election victory, while riots and attacks against Trump supporters have also taken place in numerous different cities.