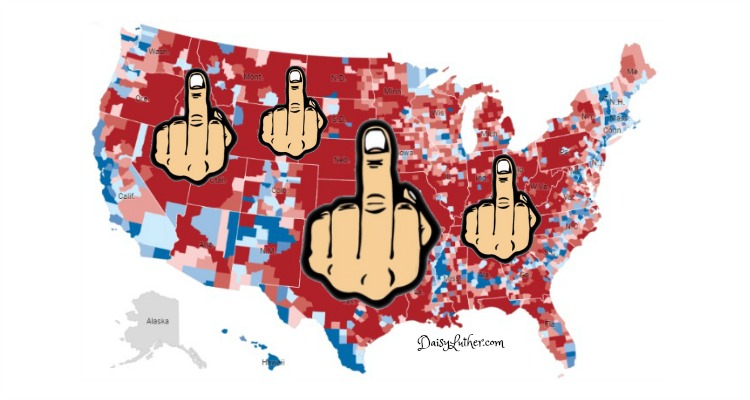 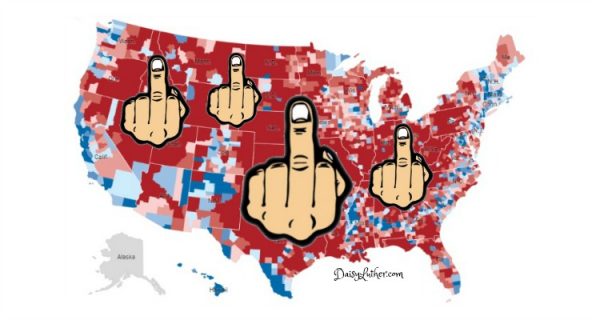 In case you wondered about the mindset of the people protesting, let me help you out.

They are filled with rage and contempt.

They aren’t just disappointed in the outcome. The tolerant left outright hates anyone who feels differently about the results of the election. Caveat: Obviously, not every single person who is outraged at Hillary Clinton’s defeat is seething with hatred, but if you go to Twitter, you can see the harsh words of some very vocal dissenters.

And the thing is, many of us aren’t even really pro-Trump, but we’re anti-Clinton. Personally, I have a wait-and-see attitude about Trump’s presidency, I’m glad Russia no longer wants to nuke us, and I’m over the moon that I don’t have to choke down the bitter pill of another President Clinton.

Let’s dissect a comment that someone left here on my site. It was in response to the article I wrote wondering why none of the so-called “leaders” from the Democratic side had said anything to try to bring about peace in America. Here you go, Angry Commenter Jay – your 3 minutes of fame.

There’s foul language, but I’d like everyone to get the full effect.

This article is fucking hilarious. It isn’t the responsibility of Obama, Clinton, or Sanders to quell the anger of the citizens protesting.

It has become clear that the voters who supported Trump want to now pretend as though they can call for unity or peace. That simply can’t be the case. When Barack Obama was elected, not once but twice, all of the racist, sexist, homophobic, xenophonic deplorables who dissented to the notion that a man of color could be president also immediately had dissent upon their plate. They burned effigies of Obama in nooses and protested in groups denouncing his citizenship.

This kind of behavior probably did occur in a few places, but not in enough numbers to have made an impression on the internet. I spent a bit of time searching for some examples to present a fair picture but found nothing of substance. There certainly were not the same violent rampages going on in our cities, nor did they have the backing of a deceitful, left-wing media. Those bad apples were by far the minority of people who were disappointed, or even outraged about the election of Obama. Personally, I don’t care what color someone’s skin is when they demand that I pay for a consumer product or when they send my tax dollars to be spent on drones and wars in other countries. However, I maintained dignity, sucked it up, and dealt with it, as did every person I know.

One thing the article does have correct though is how small the scale of their efforts was behind the safety of the internet. Most of the greasy handed, uneducated, backwoods, “Blue Collar”, toothless heathens that populate this nation and unfortunately the voter pool preferred to sit in their shit stained skivvies in the privacy of their double wide manufactured home and spew their hate on the internet. Not once could these people understand what it meant to mobilized by passion for humanity and equality for all. I mean they could barely be ambitious enough to get down to old Taco Bell and get a prescription for diarrhea later.

And there you have it. This underlying notion that any Trump supporter (or in my case, Clinton-opponent – I wasn’t jazzed about either candidate) is a “greasy handed, uneducated, backwoods, “Blue Collar,” toothless” heathen sitting in “shit stained skivvies in the privacy of their double wide manufactured home.”

But somehow we are the condescending ones who don’t care about others? Seriously?

This guy just disregarded every single person from a red state as an uneducated hick. He denigrated the business owners, the libertarians, the conservatives, and the people who saw Hillary Clinton and her ilk for the truly evil, greedy people that they are. We were all just lumped into some kind of Great American Trailer Park made up of any place but New York, Massachusetts, the areas around the Mexican border, and the West Coast.

They mobilized to the polls this time to vote for a discarded Halloween Trumpkin and you know what, they won. Not the popular vote. The electoral vote (which is an archaic system designed to give white slave owners more votes than freedom supporting northerners).

The electoral vote is the one that counts, so….

Also, if you take a look at this handy map, it may open your eyes to the importance of the electoral college, which is something I, myself, criticized previously. That was before I saw that just a few urban regions would be ruling 90% of the geographic US without it.

If you look at it that way, you might consider that without the Electoral College, smug, superior liberals feel they should have more say in America than freedom-supporting non-liberals.

Speaking of superiority, here’s the next little gem from our angry commenter.

These people…the deplorables…don’t understand what is happening because they only do things for themselves and their hateful interests. To protest aloud amongst thousands of others for the equality of someone different…blows their simple mind right up. And I couldn’t be happier they call us crybabies. I couldn’t be more thrilled that they say we should be looking to move forward. The more they make each of these statements, the more clear it becomes how dense they truly are.

I’d like to respond. I don’t hate immigrants. I have been an immigrant and have emigrated. My daughter is an immigrant to America. I don’t hate minorities, but I hate being called a racist when I’ve done nothing to deserve that title. I don’t hate gay people, I support gay marriage if marriage must be a function of the state at all, and I couldn’t care less where anyone goes to the bathroom. Most of my friends feel the same way I do about these topics.

But your friend Hillary Clinton took loads of money from countries where women are abused as a cultural norm, where genital mutilation is a rite of passage, where people who are homosexual are brutally murdered if their orientations are discovered, and where Sharia law is the law of the land. If you want to talk about something mindblowing or someone who is dense, maybe you should address those issues.

And finally, here’s the most troubling part. These people have gone far beyond butthurt millennials.  They have no interest in a peaceful resolution unless they get their way.

We are moving forward. We are marching ahead unafraid to hurt feelings (which I must say the right wingers seem to be really bothered for people who want to claim we are nothing more than fragile millennials throwing a tantrum). We just refuse to move forward alongside the disgusting bigotry they represent. We too call for unity people but we unite not with them. Let us unite against and in spite of them.

They don’t even grasp that they’ve been mobilized by people like George Soros, who through his various “charitable organizations” has tried to destabilize America the way he destabilized Europe and attempted to destabilize the Ukraine.

This nonsense goes far beyond a First Amendment right to protest. As soon as the first window was broken, the first rock was thrown, and the first house was burned down, it became a riot.

While I know this angry guy doesn’t speak for every single person out there who is dismayed that Trump will be the next president, his virulent post can tell us a lot about the rationalizations that the angriest among them are making.

These people don’t think “Love Trumps Hate.” They’re filled with hate for a huge geographic percentage of the country. They look down on us with disdain from their lofty perches of  “social justice” and feel that we’re nothing more than little bugs, getting in the way of their grand vision for America.

They sincerely seem to want a war.

I don’t believe that they really understand what that means.