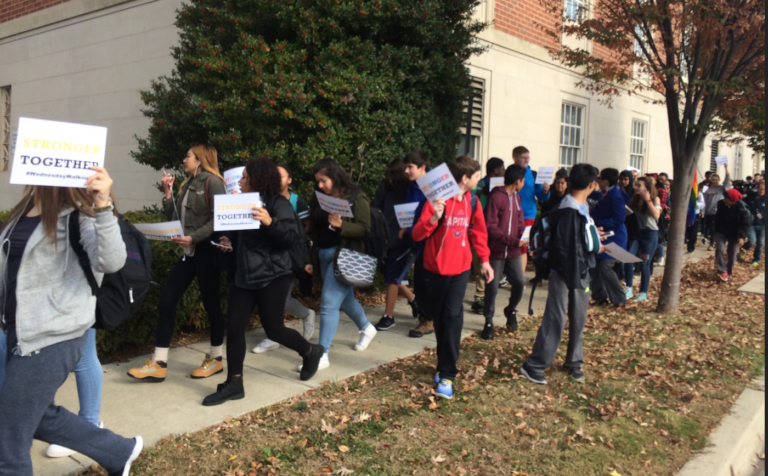 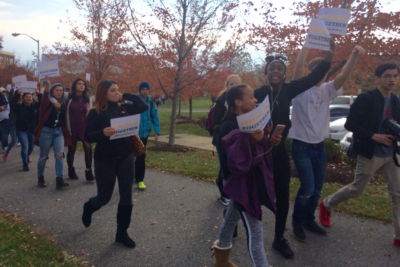 Why aren’t these children in school? Why are we allowing the left to weaponize our children, corrupting their minds (and souls) and making goose-stepping thugs out of them? We are seeing this across America: high school teachers  and college professors are inciting these mindless tools to violence and hate.

A 15-year-old Trump supporter was beaten and taken away taken to the hospital in an ambulance after being severely beaten by leftwing students.

WASHINGTON — A student is facing assault charges after a student protest of the election of Donald Trump to the presidency turned violent Wednesday.

Hundreds of students from Richard Montgomery High School were carrying signs reading, “Love Trumps Hate,” and chanting near the Rockville courthouse on Maryland Avenue in a protest that began at about 10 a.m. when a 15-year-old boy wearing one of the Trump campaign’s “Make American Great Again” hats was attacked by about four students

The group surrounded the teen, punching him repeatedly, then threw him to the ground and kicked him repeatedly in the ribs. It is not yet clear what led up to the incident, but Maj. Michael English with Rockville police said the victim in the matter was not the aggressor.

“They jumped him and beat him up pretty bad,” Max Stucky, a bystander who witnessed the attack, told WTOP.

The teen, who wasn’t seriously hurt, was seen clutching the back of his head in pain. He was helped to his feet by medics and taken to a hospital in an ambulance.

So far, police have identified one student involved in the beating and filed charges of second-degree assault, English said. The student is not in custody,

Police officers are talking with witnesses.

There was a large police presence during the protest, but there were no further problems. The students returned to the school’s football field at about 11:30 a.m.

The march marked the third straight day of student protests in the D.C. region in opposition to Trump’s election

On Tuesday, hundreds of students from D.C. public schools walked out of class to protest in front of Trump’s downtown D.C. hotel and then marched up Pennsylvania Avenue to the Capitol and Supreme Court. On Monday, hundreds of Montgomery County high schools participated in protests that briefly blocked parts of University Boulevard that morning.