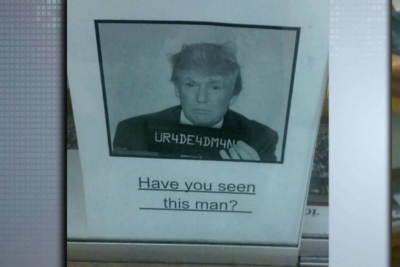 If this election brought to anything to light, it’s how bad our children have been disabused by the department of education and school indoctrination, not just in the inner cities but across the country. It is shocking. Earlier today I reported on Democrat high school kids severely beating a 15-year-old student who was wearing a “Make America Great Again” cap.

It’s all over the country. Children who think differently or other than leftwing ideology must live in constant fear. The irony is school officials say they have created “safe zones” for who? Goons and thugs.

Donald Trump was right. Abolish the Department of Education — they have become recruitment centers for Nazi-like youth. We must take back our schools.

DULUTH, MN -A picture of Donald Trump with the caption “you’re a dead man” has officials investigating at a Duluth Middle School.

The anti-Trump picture was discovered inside a glass case at Ordean-East Middle School on Monday.

School District officials say the school principal was made aware of the picture on Tuesday and immediately took it out of the case.

School personnel and the school resource officer are looking into how and when it got into the case.

“Sadly, (it’s) another example of the increase in inappropriate and unacceptable behavior related to the election that we’re working to address in our schools,” a statement from the school district read.