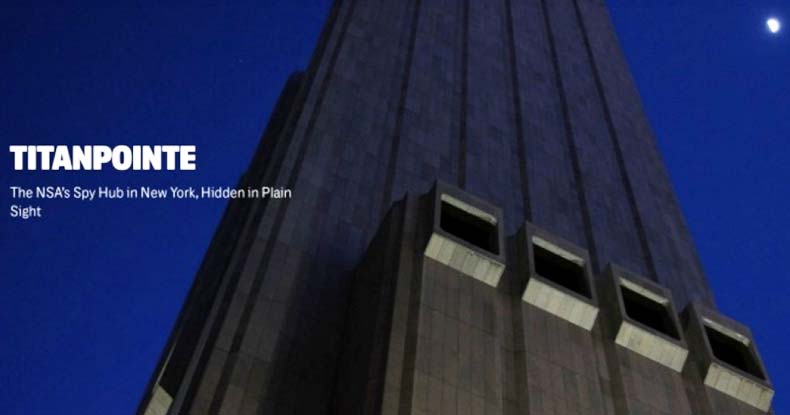 A menacing gray skyscraper, known as the Long Lines Building to New Yorkers, assumed to be nothing more than an AT&T hub, is one of the most important surveillance facilities of the National Security Agency (NSA).

An investigation by The Intercept found that the “Project X” building – constructed to withstand an atomic blast and house and feed 1,500 people for two weeks – is host to the NSA as it works with AT&T conducting mass surveillance.

“Documents obtained by The Intercept from the NSA whistleblower Edward Snowden do not explicitly name 33 Thomas Street as a surveillance facility. However — taken together with architectural plans, public records, and interviews with former AT&T employees conducted for this article — they provide compelling evidence that 33 Thomas Street has served as an NSA surveillance site, code-named TITANPOINTE.

Inside 33 Thomas Street there is a major international “gateway switch,” according to a former AT&T engineer, which routes phone calls between the United States and countries across the world. A series of top-secret NSA memos suggest that the agency has tapped into these calls from a secure facility within the AT&T building. The Manhattan skyscraper appears to be a core location used for a controversial NSA surveillance program that has targeted the communications of the United Nations, the International Monetary Fund, the World Bank, and at least 38 countries, including close U.S. allies such as Germany, Japan, and France.”

The skyscraper, which is a looming dark shadow unlit at night, was designed by John Carl Warnecke, a prominent architect in government circles, including the U.S. Navy and embassy complexes.

Warnecke’s Project X was borne of a secret program code-named BLARNEY that began in the 1970s, where NSA began developing “commercial partnerships” for spying activities, according to a newly published Snowden document.

It was likely used to target anti-Vietnam War activists and a host of “domestic terrorist and foreign radical” suspects such as Martin Luther King and certain American journalists. A Congressional inquiry in 1975 found the NSA invaded privacy and violated Constitutional rights, which resulted in the Foreign Intelligence Surveillance Act meant to rein in the agency’s abuses.

BLARNEY remained a critical part of NSA’s electronic intercept capabilities at least into 2013, when Snowden revealed the program.

“BLARNEY leverages “commercial partnerships” in order to “gain access and exploit foreign intelligence obtained from global networks,” the document states. It carries out “full take” surveillance — a term that refers to the bulk collection of both content and metadata — under six different categories: counterproliferation, counterterrorism, diplomatic, economic, military, and political.”

TITANPOINTE is one of three “core sites” of the BLARNEY program. There it links to AT&T routers and operates powerful satellite antennae on the roof, which vacuum up internet data passing through foreign satellites in another secret programs known as SKIDROWE.

It is unclear whether NSA can directly tap in to AT&T’s communications at will, but the telecom giant has long been a willing partner to the surveillance state. As early as 1976, AT&T was shielded from scrutiny by President Ford, who called the company “an agent of the United States acting under contract with the Executive Branch.”

The NSA talked of AT&T’s “extreme willingness to help” in collecting billions of emails, at a time when revelations of domestic surveillance and warrantless wiretapping gripped the nation.

“This is yet more proof that our communications service providers have become, whether willingly or unwillingly, an arm of the surveillance state,” said Elizabeth Goitein, co-director of the liberty and national security program at the Brennan Center for Justice. “The NSA is presumably operating under authorities that enable it to target foreigners, but the fact that it is so deeply embedded in our domestic communications infrastructure should tip people off that the effects of this kind of surveillance cannot be neatly limited to non-Americans.”

The dark, foreboding look of TITANPOINTE fits well with its long history of rights violations, in the name of advancing U.S. hegemony through war-making and economic and political sabotage.