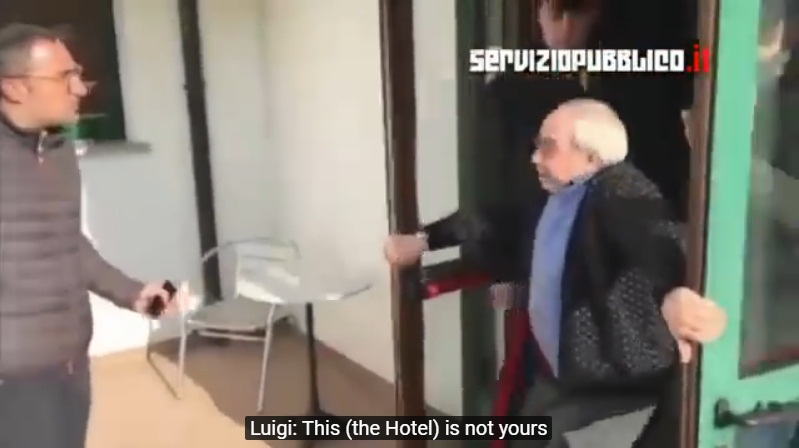 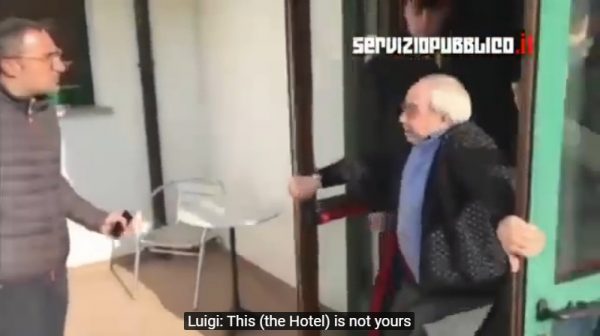 Shocking video out of Italy shows an 80-year-old hotel owner try and barricade the doors to his hotel to avoid being forced to house a small army of so-called “refugees,” all of whom appear to be military-aged males from Africa.

The elderly gentleman in the video is Luigi Fogli, a businessman in his 80s, who runs a hotel (Hotel Lory) in Ficarolo, in the province of Rovigo. Not long ago, he inquired about providing asylum accommodation services from the local government, but chose not to pursue the matter further when he found out that he would only be paid 7 euros per “refugee” per night. At that point, the local prefecture simply confiscated his hotel and forced the invaders upon him.

He tried to block their admission and, in fact, managed to hold it up for a few hours. But, eventually, he succumbed and the invaders arrived. Apparently he fainted at some point during the proceedings.

DMF reports similar cases are occurring all over Italy:

In some places, as in the incident described above, the proprietors resist; in other cases they cooperate and defence is left to the local citizens.

Here is a picture from a similar incident in Verona. The hotel Castello had been confiscated but locals were happy and set up barricades. The mass confiscation of property to host “refugees” has provoked mass protests in Verona and given rise to the “Verona ai Veronesi” [Verona for the Veronese] movement. Here are some videos of their recent protests.

Italy’s prime minister is a socialist named Matteo Renzi who fully supports this migrant invasion. He also supported Hillary Clinton over Donald Trump in our election.

Earlier this year, he promised to resign if constitutional reforms he was pushing were not passed by popular vote in a nationwide referendum. He thought at the time this would make people more likely to support the measure, but now with Donald Trump’s election the anti-globalization Five Star Movement is telling everyone to vote against the reforms. In effect, they’ve managed to turn the vote into a recall election.

Disturbing scenes like the one above cannot be allowed to continue. Every last Italian needs to vote against Renzi’s reforms and follow in our wake to Make Italy Great Again.