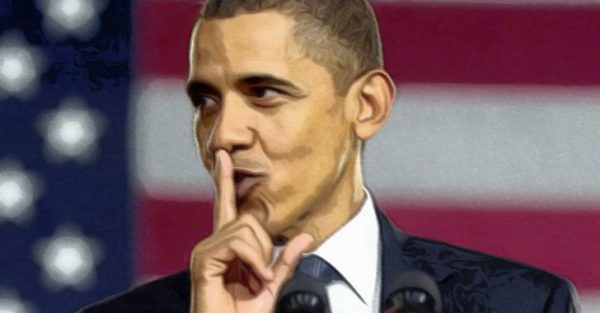 In his last days as President of the United States, Barack Obama has decided to join the chorus of mainstream voices taking a stand against “fake news.”

In recent weeks a growing number of pundits within the deadstream (formerly known as the mainstream) media have begun to discuss “fake news” and satire websites and what effect they have on the American public. Some of these pundits are worried that bad information on the Internet paved the way for President-Elect Trump. In fact, a study published Wednesday shows that fake stories related to the election generated more traffic on Facebook than leading stories from “more than a dozen major news sites.”

Now, President Obama has decided to throw his hat into the ring by sharing his thoughts on how illegitimate news could affect the political process. The Hill reports that during a press conference in Germany on Thursday, Obama said that if Americans can not “discriminate between serious arguments and propaganda, then we have problems.”

Obama went on to argue that because websites containing misinformation are often packaged “very well” it may inappropriately affect voter attitudes towards political candidates.

“Part of what’s changed in politics is social media and how people are receiving information,” he said. “It’s easier to make negative attacks and simplistic slogans than it is to communicate complex policies. But we’ll figure it out.”

President Obama and political pundits are not the only ones warning about fake news. Recently, Google has also announced that it will be prohibiting “fake” and “misrepresentative” sites from using its AdSense program. “Moving forward, we will restrict ad serving on pages that misrepresent, misstate, or conceal information about the publisher, the publisher’s content, or the primary purpose of the web property,” the company told Reuters . This policy will include websites labeled as “fake news.”That last line should have lovers of free speech and independent media very concerned. President Obama and incoming President Trump are prepared to “figure it out” so independent, non-corporate media can be dragged into the same category as actual fake news and satire websites. Eventually, the independent and alternative media sites that have worked tirelessly to expose the lies of the corporate media will be outright banned and blocked, or the average American will be so heavily propagandized that they will not bother checking sources that have been blacklisted.

On November 14, U.S. News & World Report released a piece titled, “Avoid These Fake News Sites at All Costs”, which listed several websites divided into categories of hoax or fake sites, satire, or simply propaganda. The website ranking was put together by a website called Fake News Watch. In what I would consider a badge of honor, Activist Post was labeled “propaganda” by this deadstream outlet. The irony is that U.S. News & World Report is guilty of pushing false narratives and propaganda. As Brandon Turbeville notes:

Remember, it was U.S. News and World Report that published “The Liberal Case For Intervention In Syria,” which was a pathetic attempt to justify yet another American war of aggression against a country that did nothing to the U.S. nor posed any threat to it.

There was also no mention of CNN for its infamous “Syria Danny” fiasco where the corporation was caught red-handed staging a propaganda video against the Syrian government, ultimately to draw Americans in to having pro-war sentiment despite the weariness of foreign adventures enabled by “real” news organizations like the New York Times and CNN.

Only days later a Google Doc began circulating claiming to be another list of “False, Misleading, Clickbait-y, and/or Satirical “News” Sources.” This list was reportedly put together by Melissa Zimdars, associate professor of communications at Merrimack College. In an interview with USA Today, Zimdars says that the public should take responsibility for checking sources, but that perhaps social media sites like Facebook could provide verification tools. But should we really trust Mark Zuckerberg and Google to tell us what is truth and what is lies?

Regarding the fact that several websites listed on Zimdars document actually report factual news, she says, “I read several of the publications listed, so I’m not trying to pass a value judgment on them. They’re on the list possibly because they rely on clickbait headlines sometimes, and so it’s important to understand if they’re coming from a particular perspective or trying to emphasize a particular point, that people need to read widely in order to create a fuller picture of whatever events they’re reading about.”

She goes on to explain that “on this document I created, there’s four different kinds of sources,” and “because that list identifies some fake news sites, some that may be misleading or unreliable that do report sometimes on actual events to various degrees to truthiness.” On this point I cannot disagree. Unfortunately, I have seen some of my favorite sites and friends opt for clickbait-y headlines that don’t necessarily tell the full story and could possibly mislead someone who does not read past the headline.

This means that both writers, journalists, and readers have a responsibility. If we do not work to report accurately and if readers do not take the time to dissect complex issues, then we are doing a disservice to ourselves. Also, this provides the perfect excuse for the State to step in and once again attempt to play parent figure. All of this ultimately leads to more control and more censorship.

If you want to help save the independent media stop sharing fake stories and check your sources. Journalists, it’s time to care about more than just clicks and shares. Focus on writing the honest, credible stories that helped propel us to the position we are today. The deadstream is rendering itself irrelevant and with their last dying breath they are attempting to subvert the power of the free media.

Don’t allow them to win.