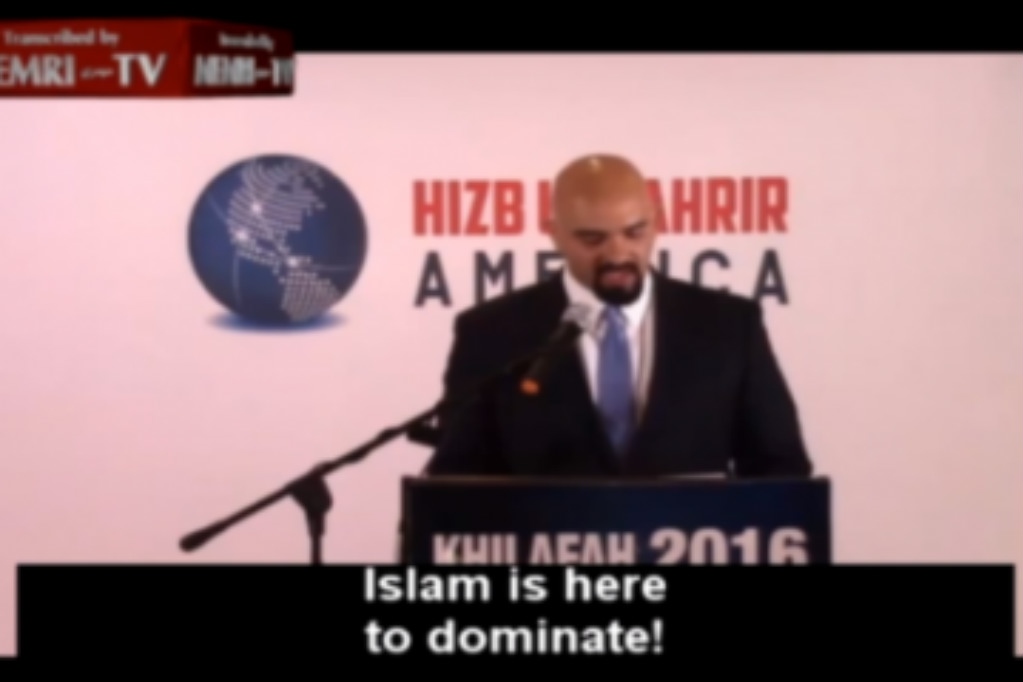 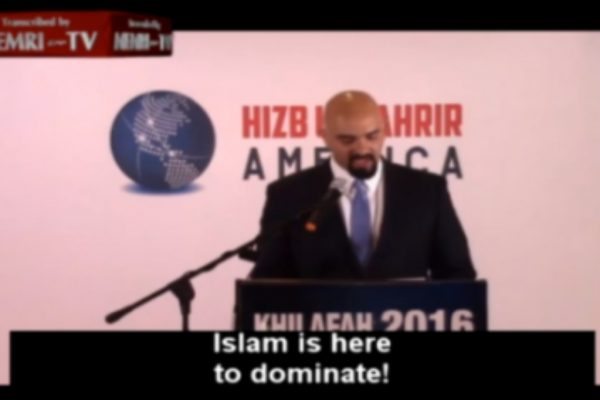 At least there is one Muslim in America who is open and honest about what Islam is and what it is here for. No taqiyya, no mincing of words. Islam is here to dominate.

Haitham Ibn Thbait, of the American chapter of Hizb Ut-Tahrir, told American Muslims earlier this year that Islam was not here to integrate, but rather to dominate.

“The Prophet said: ‘There is no god but Allah,’ said Thbait. “Instead the [elites of Mecca] rejected. They offered the Prophet wealth, status, and political representation – a seat on the executive branch within Mecca’s secular order – all to avoid this statement and its implications. Yet he rejected their offers and continued his journey towards radical change, providing us with step-by-step instructions on how to make this religion supreme.”

“The elites of Mecca would use every possible measure to coerce or contain Muhammad‘s call for change within specific parameters,” he added. “Those parameters would permit the changing of anything that did not threaten their system and infringe on their power. But this message is not here to integrate. It is here to dominate. Islam is here to dominate! This was an ideological struggle, the sole purpose of which was to organize Man’s affairs in accordance with a system revealed by Allah.”

“There was no room for compromise,” Thbait continued. “Instead Allah revealed to the Prophet, saying: ‘Proclaim openly, as commanded, and turn away from those who associate others with Allah.’ ‘Proclaim openly, as commanded by Allah’ – this is our activism. It is free of polytheism, the polytheism of a secular system. Activism within a flawed infidel system is forbidden.”

There is definitely a problem with polytheism in our land, but Islam will not help that since it is a flawed ideology that thrives on death, not life, and because it is an anti-christ religion at its heart.

You cannot raise your hands to Allah, while extending your hands to men for legislation. Every four years, you do just that. Muslims are pressured to get out there and vote, believing somehow that their insignificant numbers have an impact. The effort to get Muslims out there to vote has never been about their significance. It is part of an effort to assimilate Muslims.

The argument used was always the “lesser of evils.” So now, killing millions of Muslims is a “lesser evil.” “What is the matter with you? How do you judge?” [Quran 68:36] The ballots have brought you nothing but disgrace, and have soaked you with the blood of your Muslim brothers and sisters. The problem with their system is not the scores of dead. It is deeper than that. It is their secular faith. It is in direct opposition with our creed, when Allah says: “Legislation belongs to none other than Allah.”

Muhammad and his companions established for us a political system where sovereignty belongs to Allah and not to the elites, where politics meant caring for the affairs of Mankind, not only the elites, where da’wa was conveyed to the whole of society, not only to the oppressed and excluding the elites. This system was not for the 99% or the 1%. This system was for the 100%. For those of us in the West, Allah granted us the opportunity to be amidst a people so misinformed that the truth we offer will resonate. Our voice is our greatest weapon, and our silence is our worst enemy.

They want to entice you and intimidate you into embracing their way of life. They want to change our Islam We are not their puppets. We are a cure and a mercy. We carry a comprehensive system of solutions for Mankind, and we should act accordingly. Muslims in the West are a part of this struggle. We should not underestimate our impact in this global effort. We need to be honest about who we are, what our global program is, and advocate for the system of Islam, wherever we may be, and explain it to Muslims and non-Muslims alike. Don’t fall into the electoral trap.

Some of what he says is true. This idea of being used is very true, not only of Muslims, but of many in our society. However, Islam does not offer truth. It offers lies. As for killing Muslims, perhaps one should follow the blood trail left by Islam, not just in this century, but in the previous nine!

While I do admire his conviction, it’s placed in the wrong thing. I wish more Christians understood their divine mandate and obeyed it (Matthew 28:19-20). I wish they understood that Christians are ambassadors for King Jesus and that He is dominating the world through the message we are to be teaching others (1 Corinthians 15).

Sadly, American Christians many times can’t even get the basics of the Gospel right. It is because we have lost our saltiness that we are being trampled underfoot in America (Matthew 5:13). May God renew us, even as He did Samson (Judges 16:28), and either cause our enemies to bow to Him or destroy them before us.