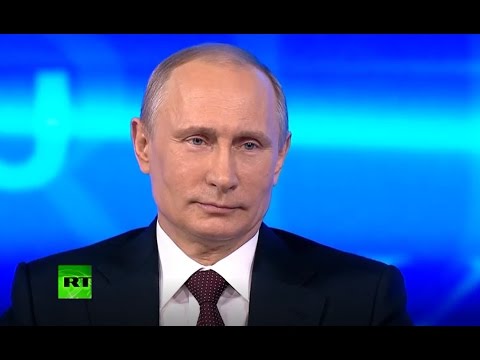 “We are not fearful”

During a live question and answer session, Russian President Vladimir Putin vowed to “choke” NATO if it continued to encircle Russia by interfering in Ukraine and Georgia.

Although many are expecting an easing of tensions between the United States and Russia after the election of Donald Trump, Putin made it clear that there is no love lost between Moscow and the NATO alliance.

Putin was asked a question by TV host Dmitry Kisiliov, the man who previously expressed his fear that Donald Trump would be assassinated before he became president. Kisiliov also asserted that the Obama White House may stage a provocation to go to war with Russia and Syria.

“I feel like out country is encircled within a ring, I personally feel a certain suffocation, like someone is strangling me, I feel it is NATO,” said Kisiliov.

Claiming that NATO was “spreading like a cancerous tumor” and was preparing to swallow up Ukraine and Georgia, Kisiliov asked Putin, “So where is the red line? How do you feel about it?”

“We can choke everyone, why are you so afraid?” responded Putin, to widespread applause from the audience.

“We are not fearful, I have no fear and nobody should,” added the Russian president.

Putin’s statement follows a fiery exchange between U.S. State Department spokesman John Kirby and RT reporter Gayane Chichakyan during which Kirby asserted that he was not, “going to put Russia Today [RT] on the same level with the rest of [the journalists] who are representing independent media outlets.”